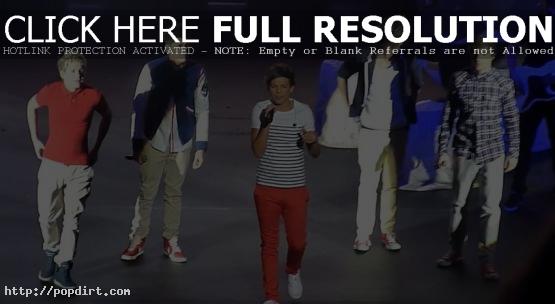 Niall Horan, Zayn Malik, Niall Horan, Liam Payne, Harry Styles and Louis Tomlinson of One Direction spoke with ‘Good Morning America’ the other day to talk about their new live tour and DVD, ‘Up All Night’.

Zayn on their mothers reaction to them going out on the road:

I think all of our moms get a bit emotional when (we leave). We’re still their little boys, so I think they all get a little emotional. I think there is worse circumstances than being out here for.

Zayn on if he’d consider living in the U.S.:

You know what, I love the U.S., but I guess I’d miss my family too much, so probably not. I got to stay true to the UK.

Harry on what hair product he uses:

I use stuff by a company called Bumble.

Louis on what fans need to know about Liam:

Liam has actually broken his toe. Nobody knows.

Liam following up on the broken toe:

I actually dropped a MacBook Pro on it, which is not a very exciting story at all.

Zayn on Harry’s secret, he joked:

His hair is actually straight.

He acts like a bit of a bad boy, but actually he’s a big softy really.

I know one, he can speak really good Spanish.

Video of the segment, which features a bit with tourmate Olly Murs, has since been removed at abcnews.go.com.

«Niall Horan & Harry Styles On Turn-Offs, Fighting & Body Switching
The Wanted On ‘Glad You Came’ Success & Following Up With ‘Chasing The Sun’»