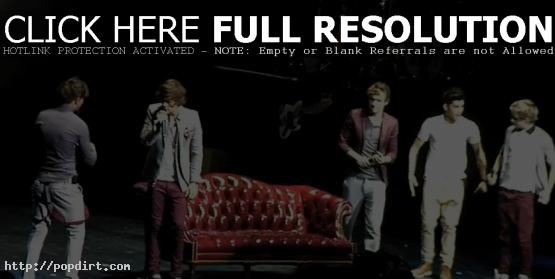 Tv3’s Xpose caught up with Niall Horan, Zayn Malik, Liam Payne, Harry Styles and Louis Tomlinson of One Direction in Ireland recently, where the boy band talked about making history with the success of their single ‘Live While We’re Young’, comparisons to The Beatles and being part of a big Pepsi ad campaign. They weren’t as thrilled to talk about girlfriends before slipping into another room.

Talking about the ‘Live While We’re Young’ chart success, Harry said, “It felt good. I think we’ve been kind of nervous about the second album, and now we’re really happy with it. We’re glad that it’s kind of doing well already, so we’re excited.”

As for talk they’re following in the footsteps of The Beatles, Niall said, “I don’t think so. We don’t feel like it anyway. If we were ever to emulate that success, it would be amazing, but The Beatles are The Beatles.”

Discussing their role in the new Pepsi advertisements, following in the footsteps of David Beckham, Elton John and Britney Spears, Liam said, “It’s mad because we’ve watched all of them since we were a kid and Snoop Dogg and David Beckham, you saw those big Star Wars adverts so yeah it’s really cool.”