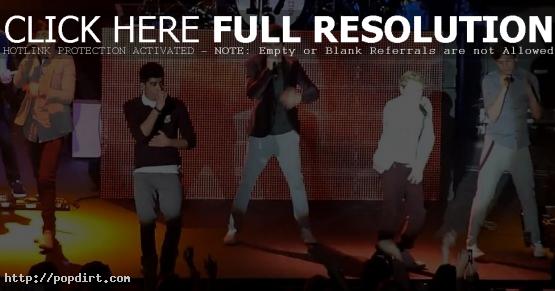 One Direction ended their UK tour in Belfast, and Pete of Cool FM caught up with the group members Zayne Malik, Niall Horan, Liam Payne, Harry Styles and Louis Tomlinson at the Culloden recently. The guys talked about wrapping up the tour, the best thing about the tour, questions they always get asked that they’re sick of, playing larger venues, how they feel about bringing their act to America, if they’ve made any unusual tour rider requests, if they’re getting adjusted to screaming girls, not putting on a separate persona in front of fans and how being a pop star has lived up to their expectations.

Liam on the best thing about the tour:

Niall on plans to return to Belfast at a bigger venue:

Yeah, hopefully we’re going to do an arena tour starting next year if people want to come out and see it, we’ll definitely do it. We wouldn’t have fit in the Odyssey last night because Snow Patrol, one of the biggest bans in the world were in it. Maybe next time when we come back we’ll be in the Odyssey.

Liam on going to America:

I think we’re massively excited and also a bit timid about it, hoping the fans really love the music. We hope the fans love it. It will be great.

We haven’t requested anything yet when asked about a rider, we didn’t say anything, so we just were given a default one of sweets and fruit.

Niall on getting used to screaming girls:

No you can never judge different audiences in different places. Sometimes it won’t happen to me during the show and then the next day my ears will pop.

On not putting on a persona in front of fans, Louis said:

I think that’s what people like about us, that we are completely ourselves. We’re not trying to be anything that we’re not and sometimes that might be our downfall but we’re just kids.

Niall on whether being a pop star has lived up to their expectations:

Yeah it’s amazing and it’s a great job. Everyone probably says the touring is the best part. I think it’s great to learn about the industry and learn things that you wouldn’t have known before like recording an album and stuff. It’s a great job.