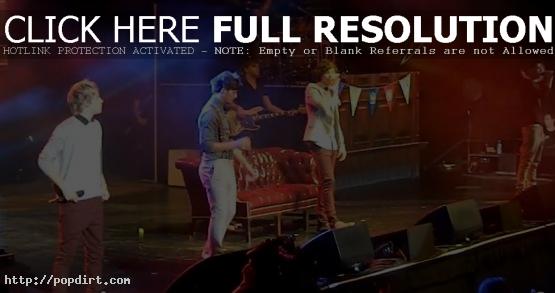 Trax FM in Doncaster caught up with Niall Horan, Zayn Malik, Liam Payne, Harry Styles and Louis Tomlinson of One Direction the other day. The boyband discussed their favorite moment since ‘X Factor’, the great reaction they’ve been getting from fans doing radio station appearances, Louis getting some unexpected visitors playing a game of soccer with friends, the non-competition for Twitter followers, Zayn’s dancing “skills”, and the ‘What Makes You Beautiful’ concept.

Louis on his favorite moment:

Recording the music video in LA was absolutely fantastic. Had a great, great time, but for me it has to be performing at the O2 Arena during the X Factor arena tour. It was just phenomenal.

Harry on the great reaction outside of radio stations:

It’s been like this like this at some, and it’s been a bit quiet at others but support has been incredible. The fans have been so patient waiting for the single as well, so we’re really happy to get it out.

Louis on having some unexpected visitors during a 7-on-7 soccer match:

I think my best friend Stan put it on Facebook without remembering he’s actually got loads of One Direction fans on his Facebook, and everyone turned up. I’ve never, ever felt more under pressure playing football in my life. It was crazy.

I don’t think we really compete with each other. And also, there is no competition, because Harry is running away with it.

Harry on Ed Sheeran writing some songs for the album:

Yeah he has written a couple of bits for us to vocal.

It’s just a confidence thing for me and I’ve learned not to take myself so serious now. It’s quite funny that I can’t dance so I just go with it and have a laugh.

Harry on ‘What Makes You Beautiful’:

The concept behind the song is basically that everyone has girls in their school that are hot and they kind of know that they’re hot, but there’s always one who is really pretty but she doesn’t know that she’s really pretty. It kind of adds to her whole thing, it makes her a little more attractive. The song is kind of about that girl.