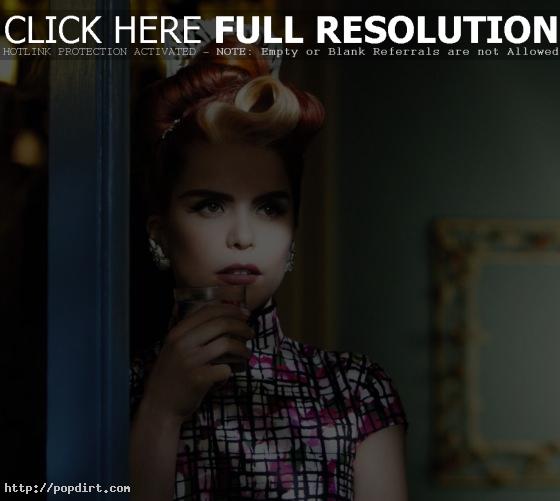 Paloma Faith is out with behind the scenes footage for her ‘Fall to Grace’ album photo shoot. The British singer songwriter talked about the album, its singles ‘Picking Up the Pieces’, ’30 Minute Love Affair’ and ‘Just Be’, the looks for the shoot with photographer David Standish and her style team.

Setting the scene, Paloma said, “Today we’re shooting the album cover, which is kind of exciting because I’m gonna be up in a harness with these tropical birds flying around, and it’s supposed to look like I’m sort of falling towards paradise.”

Talking about the album title, the musician said, “Symbolically when I was writing the record, I wanted to fall to grace, because the whole album is particularly about coming out of quite sad or dark situations and giving it some hope.”

As for the shoot with the album’s first release, Paloma explained, “We’re also shooting the single artwork. ‘Picking Up The Pieces’ is the first single and it’s a song about being in love with a man who is still preoccupied by a past relationship. I was looking at iconic pictures of Marilyn Monroe. She used to have this kind of really beautiful sort of tragedy in her life on top of the glamor, so We’re gonna try to achieve the image of me being ready to approach the world on the red carpet. It’s almost like being caught before I get there and I’ve shown my vulnerability.”

Discussing ’30 Minute Love Affair’ and its imagery, Paloma said, “It’s about when I was 14, I met a busker and I sat with him and sang songs and kind of fell in love with him a bit. Then eventually I went back the next day and he wasn’t there, even though he said he would be. The artwork is supposed to conjure up the passion that would have happened in my imagination, but it didn’t so it’s more like a kind of dreamy sequence with me about to kiss this man’s lips, but I never got to.”

After wrapping up the shoot, Paloma said, “Today has been an insane journey. The photographer and I, David Standish, created so many looks with some incredible people and that’s Natsumi and Kenichi, who did my hair and makeup, and Karl Willet styled it. I’m looking forward to the world seeing me in a more vulnerable and more distraught and probably more terrorized Paloma Faith than the last record. I think this is a bit of a coming of age album, well hopefully anyway.”