‘American Idol’ judge Paula Abdul tells ‘Extra’ she’s “still hopeful” and she still believes in love, so would she allow her fellow judges Randy Jackson and Simon Cowell to set her up on a blind date? “Randy maybe,” Paula admitted. “I trust [Randy] a little bit. Simon, no, no, never.”

February 8, 2007 – Conan O’Brien joked during his Late Night monologue on Wednesday night, “Paula Abdul says when she’s on ‘American Idol’, she doesn’t just pick people by singing ability, she also judges how well they put together their look. Yeah. In other words, Abdul picks whoever looks old enough to buy her a drink.”

February 7, 2007 – Conan O’Brien joked during his Late Night monologue on Tuesday night, “According to the latest Nielsen ratings, this Sunday’s Super Bowl was watched by 93 million viewers. That’s right. Yeah, that’s a lot. Yeah, usually when that many Americans tune into a show, it involves a drunk Paula Abdul.”

January 18, 2007 – Paula Abdul visited Fox News Channel’s ‘Fox & Friends’ for part two of her interview with Brian Kilmeade, aired on Wednesday (January 17), to talk about whether the most talented always win on ‘American Idol’ and why record numbers keep tuning in. Paula closed the interview by sitting in Brian’s lap in the taped interview, and when they went back live, they joked about the incident. 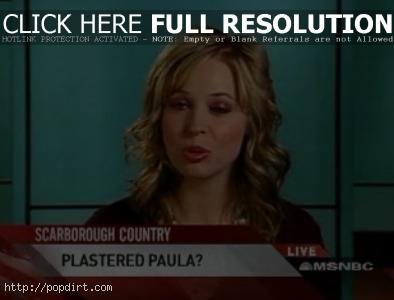 Video of the segment, aired Monday (January 15), at Bing.com has since been removed.