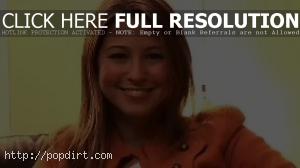 Rachel Stevens again checked in with fans on her official website’s forum on Monday (January 23). “Hi guys,” the former S Club star writes. “As I mentioned last week I’ve some exciting news to share with you which you may have seen a little bit about in the newspapers over the weekend. I’m writing to you from LA where I’ve been invited to come for a couple of months by the William Morris Agency (one of the biggest US acting agencies). I met with the guys pre Christmas and they have invited me over to meet a few key people in the acting world. I’m only here for a couple of months and then I’m back to the UK to carry on with my music. Whilst I’m here I’m planning to take some holiday, every girl needs a few days off! So don’t worry, I’ll be back before you know it! I will keep you posted with how I get on so keep an eye on the site for updates. See you all soon, Lots of love, Rachel x”

January 21, 2006 – Rachel checked in with fans on her official website’s message board on Thursday to announce that she hasn’t been dropped by her record label, as had been rumored for several weeks. “Just thought I’d drop you a quick line as although I read your messages, I’ve never posted on here before,” the former S Club star typed. “Hope 2006 is treating you all well so far. I’ve had a bit of time off to do some fun stuff and now my batteries are full recharged and I’m raring to go! It’s lovely to read all your lovely messages on here, I really appreciate the support you’ve shown me. The rumor mill has been working overtime recently, so I thought I’d let you know officially that Polydor and I are still working together and they are as supportive as ever, so no need to worry! I’ll be in touch again soon and will let you know about the stuff I’ve got planned as soon as it becomes official. Take care and lots of love Rachel x”

January 16, 2006 – Former S Club star Rachel was offered a mega-deal to front her own workout video, but declined, telling Neil Sean of Sky News: “I have no right to tell anyone how to look or work out, that’s not my job at all.”

January 14, 2006 – New magazine reports that Rachel, worried she’ll be dropped by Polydor after poor sales of her last album ‘Come And Get It’, is going to drama school in a bid to follow in Billie Piper’s footsteps. “Billie was a pop star and she has done wonders with her career,” the former S Club star said. “I’ve acted in the past but I’m not properly trained, so this year I plan to change that.”

January 11, 2006 – Rachel posted the following message to fans on Monday (January 9): “Hi guys, Hope you all had a brilliant Christmas and New Year. Thanks for your messages on the forum – I had a lovely break, and even managed to get away on a nice relaxing holiday. I’ve got all sorts of exciting stuff coming up for 2006, which I’ll be telling you about soon. There will definitely be some live dates, so I am looking forward to seeing you there. Keep an eye on the site for all the details! Love and best wishes, Rachel x”