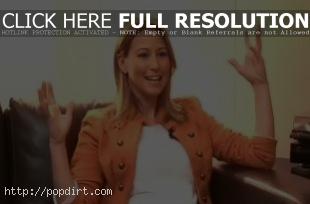 “I’ve worked with a few different choreographers over my career. One choreographer I worked with a lot on my solo stuff is a guy called Luka. He works with a girl called Roberta, and I worked with them on ‘LA Ex’ and ‘So Good’ and quite a few of my tracks actually, and they’re both these Italian glamorous, very fabulous choreographers, and I love working with them,” Rachel explained. “They’re very fantastic. Usually it takes me two days to learn the routine, but as I’m getting older, my brain is not retaining things as easily. I always need a touch up now and again. Always going from the studio to my first performance is really weird, because you take the performance out of the studio and it just feels really, the first time you always miss a few things and forget a few bits, but it’s just the way it goes.”

March 30, 2006 – Eagle-eyed fans of Rachel caught the singer/actress in the audience for Tuesday night’s ‘American Idol’. While other celebs usually are called out by name by host Ryan Seacrest or their name is captioned, the star relatively unknown in America was not. YouTube has since removed a brief clip from the show.

Rachel Stevens Getting Acclimated To LA

March 15, 2006 – Rachel checked in with fans on her official forum on March 9th, during her stay in Los Angeles. “I can’t believe I’ve been here nearly 6 weeks already, it’s absolutely flown by,” she writes. “I’ve had a few meetings which have gone really well. One of my meetings the other day was on the 15th floor, of course it had to be right at the top! Anyway at least I got a good work out & yes I’m still working on my lift phobia!! I’ve met some very interesting people, once I’ve actually found where I’m going, that is ….! The roads over here were very confusing at first and me and maps don’t really go well together. A few days of forgetting that they drive on the other side of the road, and finally learning that you can turn right on a red light, after being hooted at & frustrating lots of drivers along the way wasn’t great, but I’ve got it down now! Been getting to know all the team at William Morris (WMA), who have been taking very good care of me, showing me the ropes.”