Former S Club star Rachel Stevens official website has just launched. Included are clips from her new album ‘Funky Dory’, promo pictures, and news on how she’s been doing in the charts. Check it out at RachelStevensOfficial.com.

Rachel Stevens Back With Fiance, But No Ring

October 4, 2003 – The People reports former S Club star Rachel is back with fiance Jeremy Edwards, but isn’t sporting her engagement ring. “I’m not wearing it, no, it’s at home in a box,” Stevens said. “We’re still working through it.” 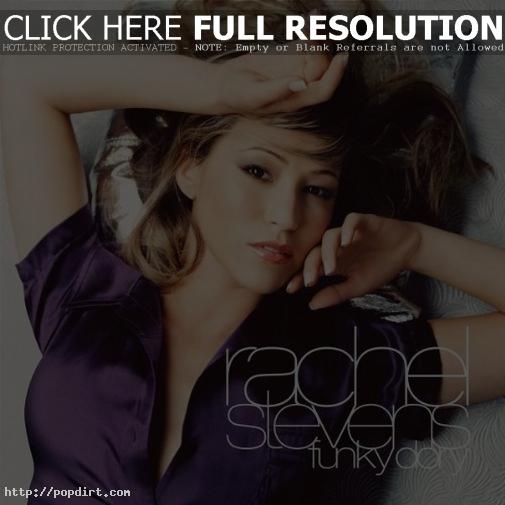 October 4, 2003 – Rachel pays tribute to her idol David Bowie on her debut album ‘Funky Dory’. Inspired by his 1971 album ‘Hunky Dory’, the former S Club samples the track ‘Andy Warhol’, and also re-creates Bowie’s look for her CD cover. She tells The Mirror, “I absolutely love this shot – it’s really different. I’ve become a bit of a Bowie fan recently – really from the influence on the album title and on one of the tracks. I thought it would be fun to recreate the original album cover and to do something which was different to a normal shoot.”

October 2, 2003 – The Sun has photos of former S Club star Rachel proving she’s back together with actor Jeremy Edwards by sharing a kiss during a day out in North London. Rachel tells the paper, “We are getting married. The wedding is back on but we haven’t set a new date yet.” Check out the pictures here.

October 2, 2003 – Former S Club star Rachel released her solo debut ‘Funky Dory’ on Monday (September 29) in the UK, but fans can check out the entire album online at the singer’s official website while chatting with other fans. Check it out at rachelstevensofficial.com.

September 30, 2003 – Top of the Pops caught up with Rachel and asked the former S Club star if she felt pressure going solo. “At first, yes. I’m still getting used to it but I’m also really enjoying it,” she responded. “Coming from a pop band, it has been a bit scary. I was always surrounded by six other friends for four and a half years and even though I’ve been doing performances and interviews all the time, it’s scary doing it on your own. People are obviously going to say, ‘Can she do it?’ but I’ve had a lot of support, especially from the audiences which has been great.”