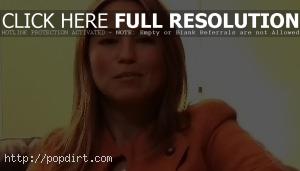 The People reports that Rachel Stevens is hoping to boost her career by teaming up with James Blunt. “Her recent material just hasn’t sold,” an industry insider remarked. “In this climate, an artist needs to be consistently in the top ten to be financially viable.” But a spokesperson for the former S Club star said, “Rachel is still very much a Polydor artist. There is nothing definite but she may even release another single from her album.”

December 30, 2005 – The moderator at Rachel’s official forum posted a warning to visitors on Friday over rumors, as reports continue to circulate that the former S Club star will be or has already been dropped by her label Polydor. “Hello Rachel fans (and a few others),” RA writes. “There have been people on here posting rumors about Rachel recently, and the other mods and I would just like to ask that you try to reduce speculation on these rumors to a minimal – preferably none at all. There has not been an official announcement, and in order to avoid negativity on the board and intrusion from the media, we would like you to wait until there is one. Sadly the admin and mods on here do not have time to deal with each post in the correct manner, so please try and make our lives easier by leaving it off of the board. This should be a place that Rachel can log on to and see her fans, not people spreading vicious rumors about her career or personal life.”

December 24, 2005 – Rachel recorded a video Christmas message for fans. “I would like to wish you all a very, very happy Christmas,” the pop singer said. “I hope you get lots of lovely presents under the tree, and have a fabulous New Year and I will see you all very soon.” Watch it here.