Former S Club star Rachel Stevens is out with the public service commercial to advise men to check themselves for testicular cancer.

“Now boys, keep your eyes on me and put one hand down your trousers,” Rachel says in the video. “But wait, I only want you to touch your testicles. I want you to give them a good feel. Now, I want you to cup each one in the pal of your hand. Get used to the size and the weight of it, and then gently take it and roll it between your thumb and your forefinger. If you’re feeling any unusual lumps or bumps, or more importantly, any recent changes, and it’s important to do this regularly. See, it’s not that hard, is it?’

Watch the racy clip below.

May 31, 2005 – Former S Club singer Rachel says she wants to play Doctor Who’s assistant now Billie Piper is leaving the BBC program, according to Ann Montini of Sky News. “I think I’d be ideal. It’s quite sporty and that’s one thing I’m good at,” Stevens told a source.

Rachel Stevens Encourages Men To Feel Their Balls… For Cancer

May 24, 2005 – The Sun reports that Rachel will be the first female face of the Everyman cancer campaign, where she’ll raise awareness of prostate and testicular cancer. “Women tend to keep their eyes open for any unusual health changes,” Stevens said. “While men have a reputation of having their hands down their trousers a lot, I doubt that they’re feeling for warning signs. Every man is vulnerable to cancer. I hope I can encourage them to check themselves.”

April 8, 2005 – Bob Geldof, Beverley Knight, Girls Aloud singers Kimberley Walsh and Cheryl Tweedy, former S Club star Rachel Stevens, McFly, and Razorlight attended a photocall for Make Poverty History campaign and ‘click ad’ at Curzon Cinema in London, England on March 31st. The ‘click ad’ shows celebrities wearing white bands (the global symbol for the campaign) and clicking their fingers one after the other. Each click symbolizes the death of a child. Across the developing world, one child dies every three seconds from extreme poverty.

April 7, 2005 – Rachel took part in an online chat with fans over at mykindaplace.com on March 30th. When asked about the new album, Stevens said, “The album’s untitled as yet… I literally just finished in the studio a few weeks ago. There’s no set date on the album release yet. I’m really excited about this album. It was a great experience working in the studio. I got to work with some fantastic producers. And writing has been a lot of fun and a real learning experience. I just feel like this album is a real pop album, I feel like I’ve found my real definitive sound.” 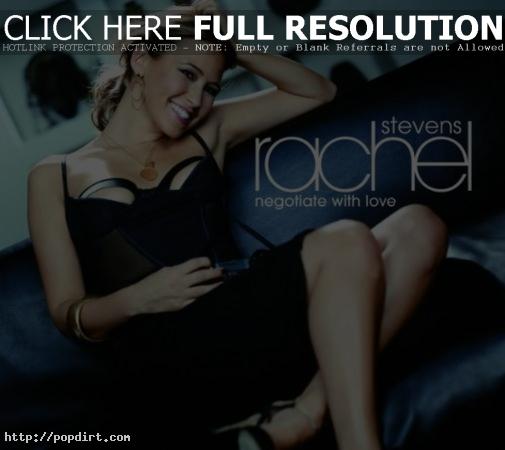 April 4, 2005 – Rachel phoned into the Radio 1 Official Chart Show on Sunday (April 3) to talk about her new single ‘Negotiate With Love’. She talked about moving into her new house, alone, guys with facial hair, and her thoughts on entering the singles chart at #10. Earlier, Stevens performed the single on ‘Ministry of Mayhem’ and dropped by ‘TRL’ UK.

March 31, 2005 – Rachel was on ‘The Paul O’Grady Show’ on ITV the other night to perform her just-released new single ‘Negotiate With Love’, and also talk with O’Grady. Rachel talked about life post S Club, acting in the new ‘Deuce Bigalow: European Gigolo’ film, gossip about marriage plans with boyfriend Gavin Dein, and more.

March 30, 2005 – Rachel is on the cover of the new The Big Issue magazine, where she talked about hopes to stretch her career long term. “It would be great to have made my millions by the time I am 35,” she said, “but that doesn’t mean I’d pack it in then. Look at Madonna, I hate it when people say she’s past it now. I want to go on and on.”