The Mirror reports 35-year-old former underwear model Austrian Eveline Savara has told how Robbie Williams wooed her earlier this month in Vienna’s Hotel Triest. Instead of relying on his fame to seal the deal, Robbie pretended he managed a football team. “He asked if he could kiss me,” Eveline said. “That’s never happened to me before – he was a real gentleman. Then we had a really long kiss. It was really beautiful, with so much feeling. It really moved me.” Eveline insists that she didn’t go all the way with the singer. 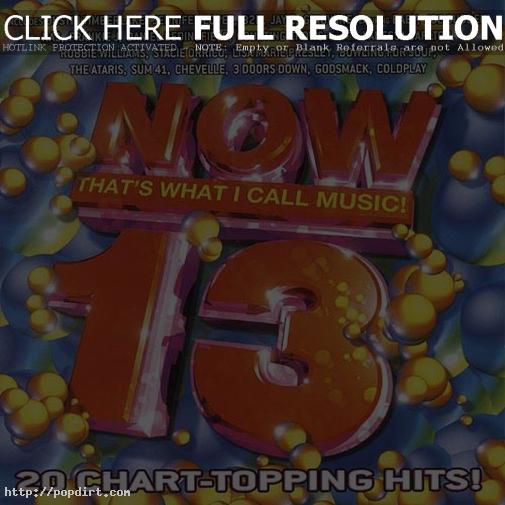 *NSYNC star Justin Timberlake, Jennifer Lopez, Robbie Williams, Godsmack, Coldplay, and Jay-Z are just some of the artists who contributed their chart-topping hits to the collection Now That’s What I Call Music, Vol. 13, due July 22nd. To date, the NOW series has generated sales of over 117 million albums worldwide, and has sold more than 39 million copies in the United States since their debut. Every NOW album in the series has reached the Billboard Top 10, and it’s the only non-soundtrack, multi-artist collection to reach Number One on the Billboard Top 200 Album Sales Chart.

July 14, 2003 – The Sun reports Robbie Williams was forced to flee the stage during a gig over the weekend in Mannheim, Germany when a giant video wall threatened to topple over on him. “Rob had been on stage for nearly an hour when someone spotted the video wall wobbling about,” an insider revealed. “There was a chance that it could come down, injuring Rob and people in the front few rows. It was decided that he should come off stage while it was fixed. But to make sure he didn’t lose all the atmosphere, Rob returned wearing a hard hat to get a laugh. It worked.” Read more.

July 10, 2003 – The Mirror reports former boy-band singer Robbie Williams warned wannabe stars that taking part in TV talent shows such as Pop Idol and Popstars just sets them up for a fall. “I know Take That were a manufactured band but it’s all gone too far,” he said. “These shows promise fame and fortune but they just chew people up and spit them out. People don’t realize how fleeting it can be. In the end, they are being humiliated for mass entertainment.”

July 8, 2003 – Nominations for The VIVA Comet Awards will be held on August 15th in Germany, and up for best international act are: Christina Aguilera, Robbie Williams, Blue, Jennifer Lopez, and Shania Twain. Nominated for best newcomer are t.A.T.u., Evanescence, Avril Lavigne, Panjabi MC, and Gareth Gates.

July 8, 2003 – The Sun reports Cameron Diaz went on a go-karting date with Robbie Williams, in a move that will likely infuriate *NSYNC star Justin Timberlake, who is touring the U.S. “They bumped into each other in the bar and decided it would be fun to go karting,” a source close to Robbie revealed. “They headed off to a posh track in the Spandau area of the city and had a great time. They both have very bubbly personalities and bounce off each other. I don’t really know if there was much romance involved but who knows what might happen?”