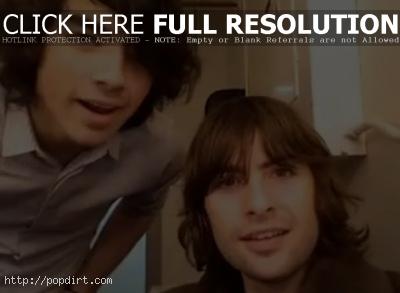 Robert Schwartzman of Rooney and Joe Jonas of the Jonas Brothers videotaped themselves hanging out in a back room in Louisville, Kentucky. The guys compared hairstyles and discussed their workout routines.

Joe: I didn’t notice our hair is kind of the same length.
Robert: Kind of. A little bit. You just got it trimmed, didn’t you?
Joe: Yeah, I got it trimmed.
Robert: How dare you. You said you wouldn’t trim it.
Joe: I worked out this morning. Did you work out this morning?
Robert: No. I’ll work out later. What did you do?
Joe: I pumped some iron.
Robert: Did you do delts?
Joe: I did kelts.
Robert: You did kelts?
Joe: Kelts. It’s a knew muscle.
Robert: How could you do that?
Joe: I just invented it.
Robert: How dare you. You said you’d never do kelts.
Joe: I’m the only guy who knows how to do kelts.
Robert: You said no more kelts.
Joe: It’s kind of addictive.