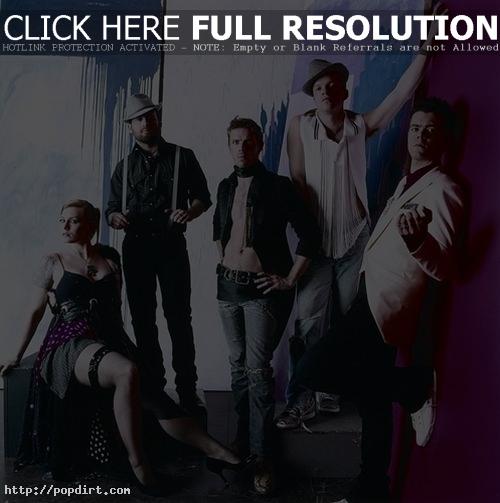 Jake Shears and guitarist Del Marquis of Scissor Sisters sat down with TVN, where they discussed their new album ‘Magic Hour’, collaborating with Pharrell Williams, how they’ve changed since releasing their debut album in 2004, Jake preferring Twitter to Facebook and their personal memories of pop legends who recently died, Donna Summer and Robert Gibb from Bee Gees.

On the new album, Jake said:

‘Magic Hour’ is all over the place. It’s a really fun kind of weird, sometimes conventional, sometimes traditional, sometimes totally bizarre all over the place kind of board game kind of album. It really is from one song to the next a completely different (experience). It just takes you on this journey that you never really know what kind of song you’re going to end up with next… It almost sounds like a collection of singles or something rather than a cohesive album.

There were all sorts of combinations of people in the studio. I usually felt we closed the studio down in a lot of ways when we’re writing. I don’t like a lot of people to be around when we’re writing music, but this record it seemed like there were a lot of people around. We made it really fast and there were constantly people coming in and out of the studio. Our friend Amanda Ghost, who executive produced the album, she was always such a crazy woman and doing ten things at once that she’s in and out all the time, and bringing people in and out all the time, so I had to get really used to writing songs suddenly with people around.

On how things have changed since their 2004 debut album, Jake said:

Our lives changed when we put out our first record and just started going. It just seems like it’s been almost eight years since that album came out, and it’s felt pretty steady. I think if any of us has changed, it’s probably been for the better. I feel like we’re a little bit more laid back. I’m a little less wound up than I used to be. I used to be a lot more high strung. Now I don’t care as much about certain things.

I love Twitter. I’ve been on Twitter for a couple of years now and it’s a blast. I use it every day. I think it’s an awesome way to be able to connect with fans. It’s really nice because you can respond… I can’t use Facebook because my brain can’t get around it. I find it really difficult and it’s it just seems like email and you have to respond to everybody. With Twitter you just respond to people but you only have this much (to type). So you can just say hey to somebody and make someone’s day by wishing them a happy birthday in one moment, and I love that. You can post pictures of yourself in your underwear and people get really happy.