Sophie Ellis Bextor did a Q&A on her official web site, with several questions pertaining to her new single ‘Bittersweet’, which she wrote just after giving birth to her son Kit. Asked where she penned the track, the British pop singer responded:

It was a very, very relaxed writing session just after I’d come back from hospital. I was taking things easy and Hannah Robinson, who I write a lot with, came round. I was still feeding Kit at the time, so I had to keep stopping every two or three hours to feed him. I remember at one point in particular I was actually feeding him while I was writing. I was thinking, “This is pretty much the modern pop star – feeding a baby and writing a dance track!”.

The entire interview at sophieellisbextor.net has since been removed.

Back from Paris. Video with junior caldera done. Macaroons eaten. Merci, Paris.
Oh and I should let you know yesterday I shot my album cover. Very nice photographer who made me shout out very odd stuff as he clicked.
And sometimes I flung my head around. Sore neck today.
All in the name of pop.

February 12, 2010 – Sophie answered a few questions from fans submitted to her Twitter on her blog at MySpace (@sophieellisbextor) on Thursday (February 11), including one who wondered how critical is the success of her upcoming album for her career and if she’s feeling pressure ahead of its release. Sophie responded:

Ooh, that is an intelligent question. I would say the least critical out of everything, actually. Because I kind of feel like I do what I do now. Although that being said, you obviously want it to do well and I’m really pleased with it. But I don’t feel as much pressure, because I feel like I’m here now, y’know? I feel like I’ll be able to put out another album after this, no matter what. 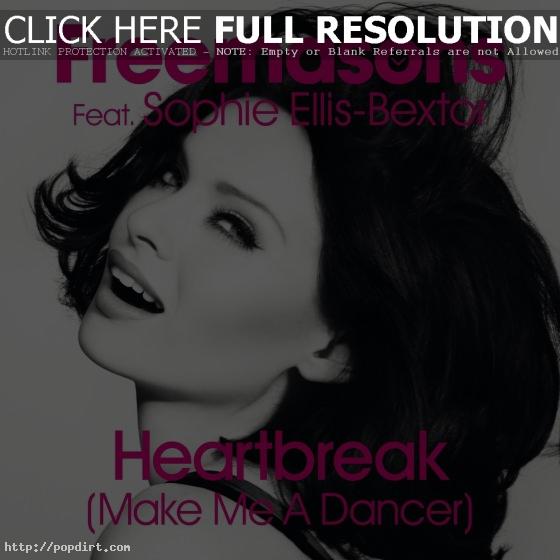 June 12, 2009 – Freemasons are out with the music video to their new single ‘Heartbreak (Make Me A Dancer)’, featuring Sophie, off the English dance duo’s third album ‘Shakedown 2’, out June 29th on Loaded Records. Watch the Chris Sweeney directed video via YouTube below.