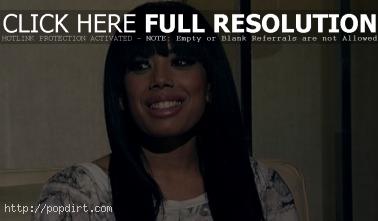 The second Sugababes on Sugababes features Jade Ewen discussing her bandmate Amelle Berrabah and how she’s a funny person who has a knack for random outbursts. Jade said when she met Amelle and Heidi Range for the first time, she expected Heidi to be shy and Amelle to be this massive personality, but she discovered it was the opposite at first. Jade said Heidi’s best quality is that she’s caring and understanding.

“Things that Amelle does that really make me laugh, to be honest she has a really funny personality in general and she’s always making light of most situations. It’s probably her random outbursts. We could be having a serious conversation, or it could just be silent like 3:15 in the morning and we’re already tired, and she’ll come out with something crazy or start running around. I don’t think she realizes it. She’s on the road and she’s in the background somewhere singing.”

Asked what she’d buy Heidi to cheer her up, Jade said, “Probably something to do with one of two things. Something to do with cooking, because she absolutely loves it. I’m not sure it would necessarily cheer her up. Or maybe something for Buddy. She has a really, really cute dog, he’s a pug, and he’s got this little squished face, and she misses him lots because he spends lots of time in Liverpool, so I might get him something cute.”

February 13, 2010 – The first Sugababes on Sugababes features Amelle Berrabah discussing her bandmate Heidi Range having a really funny personality and dressing with a really classic style. Amelle described Jade Ewen as being an uplifting person who is fun to be with and is very honest, truthful and respectful.

“The thing that I know about Heidi that most people don’t, being people that don’t actually know her like her friends would know her, that she’s really funny,” Amelle said of Heidi. “She does crack me up and she’s got a really funny personality and even though people know she’s really a lovely person and everything, I don’t think people know that she can really make you laugh sometimes if you don’t know her.”

As for their newest member, Amelle said, “How I would describe Jade in three words, one would be she’s a very bubbly and uplifting person. Second, she’s a really fun person to be with, even though these aren’t actual words, but you catch my drift. The third, I’d say, she’s very honest and very truthful and respectful. You got more than three there.”