Sugababes To Release Album in the U.S.

With their current single, ‘Hole In the Head,’ buzzing up the U.S. charts, the Sugababes will release their album, ‘Three,’ in the U.S. This version of three is different though. It will include 4 tracks from their previous album, ‘Angels With Dirty Faces,’ which wasn’t released here, and include 11 tracks from, ‘Three,’ including one bonus track. The album will be released June 22nd and will include a bonus poster. Read on for the tracklisting.

April 8, 2004 – A record company spokesperson claimed to The Mirror Mutya Buena didn’t join her Sugababes bandmates at the Capital FM Awards in London on Wednesday because she was “feeling under the weather” and wanted to rest before the ‘Babes’ European tour, which kicked off in Reykjavik Thursday night. She was at great pains to point out that, “there were no big arguments or anything.” But their tour manager said Mutya’s no-show was due to laryngitis – the same illness cited when the girls pulled out of The Richard And Judy show last month. Heidi Range and Keisha Buchanan picked up the award for Best Live Music.

April 8, 2004 – Sky News reports the Sugababes hopes to conquer the U.S. have been given a major boost after the trio landed a song in the new ‘Bridget Jones’ movie with ‘Round Round’. The girls have also been booked for a performance on ‘The Tonight Show with Jay Leno’ for an upcoming promotional visit to America. 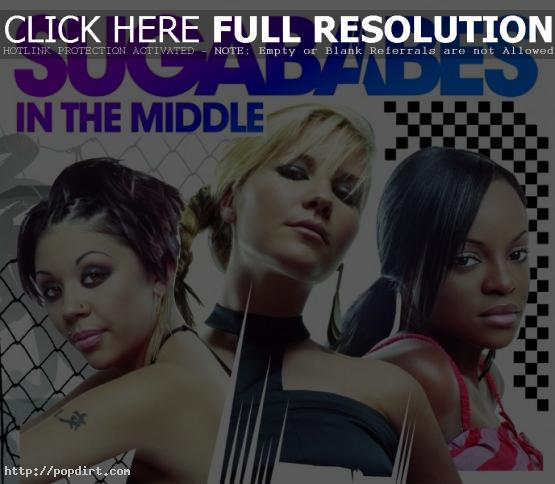 Sugababes are set to chart at a rather dismal #10 position in the singles charts according to this week’s midweeks. The third single from their album “Three”, titled “In The Middle”, has sold only 3,514 copies, 638 copies behind the #8 holders, Outkast. The Darkness, Blue, and Anastacia are all looking forward to top 5 positions.