Alexa Ray Joel is out with the music video for her new single ‘Notice Me’, off the 24-year-old daughter of Billy Joel’s upcoming debut album. Watch the Dale Arroyo directed video via YouTube below.

Singer/songwriter Alexa Ray Joel will stop by The Howard Stern Show on Thursday to discuss her new single ‘Notice Me’. Tune in at 7:00 AM on July 15th to catch the interview with the daughter of Billy Joel & Christie Brinkley. Listen to a stream of ‘Notice Me’ below.

Alexa Ray Joel: I Do Not Use My Parents’ Connections At All

Alexa Ray Joel checked in with fans on her blog at MySpace (@alexarayjoel) on Monday (April 19), discussing the two new songs she put up on her player, ‘Hideaway’ and ‘All I Can Do Is Love’, as well as more thoughts on bloggers who have been giving her grief. The daughter of singer Billy Joel and model Christie Brinkley writes:

I’ve decided to NEVER google myself again- EVER!! Those bloggers are just way too hostile and cruel on there- OUCH!!!! I can’t help but wonder: “why do they feel so much hatred towards me?”, “why do they want to believe I’m just some trust-fund baby with no voice or talent of my own?”, “why do they feel the need to call me ‘homely'” and constantly compare me to my mother’s looks, when I have a completely different look and vibe than her? I hope one day they realize that I do NOT use my parent’s connections AT ALL, and that I got the ‘Prell-Gig’ completely on my own, and I’m making this record on my own terms without “Daddy’s Help”. And that I am a real and genuine girl who wouldn’t want to hurt a fly, I just want to spread kindness, authenticity, and good music…. hey, and I have feelings too!!

Alexa Ray Joel checked in with fans on her Facebook on Wednesday (April 14), discussing her upcoming album, starring in a new Prell commercial, and her disdain for blogs. The daughter of Billy Joel writes:

By the way… I’m NEVER looking at any blogs, EVER again!! They’re too brutal, and my skin still hasn’t thickened enough yet. Still, it’s almost a good thing, in a perverse way– because the more they condescend to me and aggressively compare me to my parents, the more I feel the need to prove to the world that I do in fact have a sound, voice, style, and look that is all my own. I’m learning to let the criticism actually fuel me, and motivate me to just keep working HARDER and HARDER. Actually, I’m working SO hard (and so is my incredible producer, “go-to” everything guy, and my amazing band-trust me!), that the album is actually almost done!!! So, with luck, we’ll make our June 10th release date, right on schedule. (Actually, I shouldn’t say “album”– it’s technically an EP, which is a slightly shorter-length album– but it will seem like an album to you guys because there’s no shortage of material– lots of variety and we’re even throwing some raw acoustic versions of songs into the mix– I’ll be doing a bonus track of “Invisible” that will feature solely my piano and vocals). 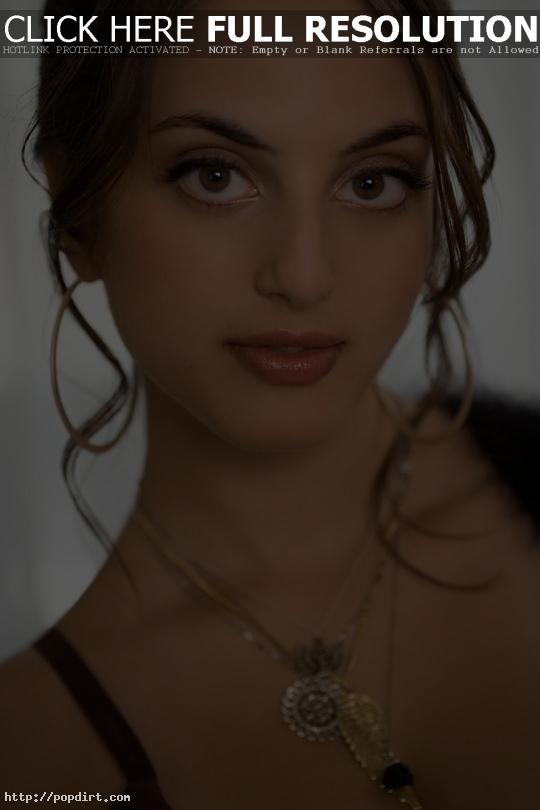 Alexa Ray Joel checked in with fans on her Facebook this evening with news on new music. The daughter of Billy Joel writes:

Hey Everyone!! Sorry I haven’t been on here in a while… been busy recording in the studio– can’t wait to release my new material so you all can hear it!!! Again, here’s the link so you can download my single “Invisible”: alexarayjoel.com. There’s more to come (and not just music)… I’ll keep you posted! Keep Spreading Peace, Kindness, & Awareness…
Lots of Love, Lex XOXOX

Alexa Ray Joel is out with footage from the recording of her new song ‘Invisible’.

“I’d rather have a really gorgeous vocal tone and do a few little things that are really important at key moments to get the emotion and then leave it straight, because it is such a strong melody to me,” Billy Joel’s daughter says in the video.

Alexa Ray Joel checked in with fans on her blog at MySpace (@alexarayjoel) on Thursday (March 19), talking about what’s kept her so busy to not post many updates of late. Billy Joel’s daughter writes:

I’m sorry I haven’t been on here for a while–I’ve been working on recording my strongest, newest material in hopes to spark the interest of a major-record label, in addition to playing a lot of major casino shows!!! Things are looking up, so we’ll see… but, believe it or not, I have no personal-assistant or online help of any sort, and I’m trying to do this all myself at the moment! So, I appreciate your patience & support–you guys have been wonderful as always.

Alexa Ray Joel checked in with fans on her blog at MySpace (@alexarayjoel) on Thursday (January 15). The daughter of Billy Joel tells readers:

I know I haven’t been on here for a while, and I apologize… I REALLY don’t want you guys to think I’ve forgotten about you (I have NOT!); but I’ve been EXTREMELY busy lately….

For instance, last month I performed on the popular morning show “..Good Day in New York”; (Did anybody catch that? My first morning show EVER!! It was a challenge, but not as bad as I thought it would be). I performed my original funk-tune “Not Alright” and my rendition of “Blue Christmas”, which aired on Christmas Morning.

And–(you guys will be VERY happy to hear this)– I JUST finished recording 8 original songs at MISSION RECORDING STUDIOS in Williamsburg, Brooklyn (New York) ***(By the way, anyone in the New York Area looking to record a GREAT, WARM, BEAUTIFUL sounding record (that’s pretty much everyone, right?)–GO THERE. The engineer, Oliver, is incredible; his mixes sound like a record before they’re even officially mixed–the sound is that good). So, I will have some NEW RECORDINGS up on my page by February (they must be mixed first!); and I intend to make them purchasable and downloadable via iTunes. (Actually, everybody’s saying that these recordings sound so good that they should be my first record, so, we’ll see! I’m actually very open to that option.) I REALLY hope you guys enjoy them, and welcome ANY feedback whatsoever, once they’re up—I basically produced them myself (with a GREAT deal of help from my incredibly “musically tasteful” band-members!), so these are definitely the recordings I’m most proud of so far… 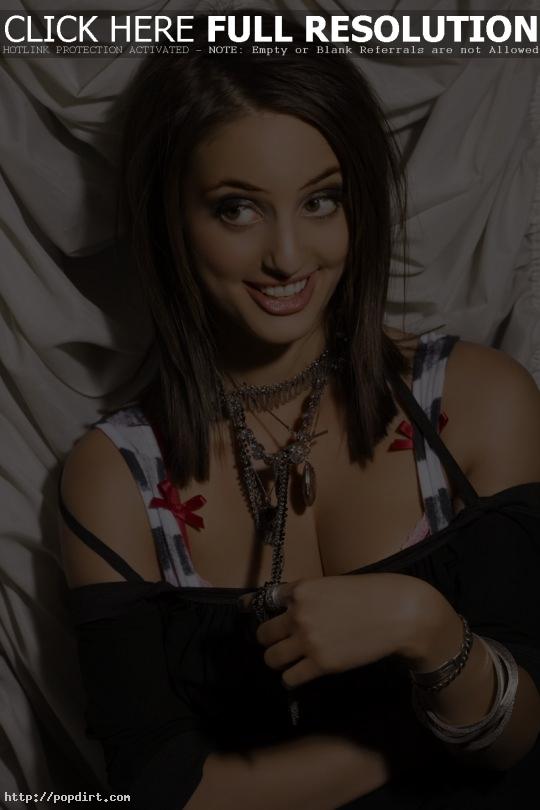 Billy Joel and Christie Brinkley’s daughter Alexa Ray Joel spoke with Usmagazine.com about her response to Perez Hilton who implied the supermodel’s daughter was ugly. “To paraphrase my father, he always said: ‘don’t take any crap from anybody,'” she said. “I’ve had a lot of people advise me in this industry to get a thicker skin and turn a blind eye to the vicious trends of the tabloid publications and blog-sites, and their dangerous effects on young women, and society in general. But if I were to follow their advice, and do nothing, I feel I would only be perpetuating something which I believe to be fundamentally wrong. I stand by my original posting.”

Alexa Ray Joel Is Proud She Looks Like Dad

Christie Brinkley and Billy Joel’s daughter Alexa Ray Joel responded to Perez Hilton’s story about her looks in a posting at her MySpace (@alexarayjoel) on Sunday (April 29). She writes:

I know it’s ridiculous, and I should have a thicker skin by now and just plain NOT CARE, but I can’t help but be a little bummed out because the incredibly cruel, bullying Perez Hilton (this tabloid guy who calls himself the ‘queen of media’) just put up a horrible picture of me on his site and basically in so many words called me ugly, or rather, wrote that I’m ‘not that bad, actually, I’m just no supermodel’. I just feel like saying: ‘YES, my mom and I look completely different, and I’m OK with that. I like that I look unique, or more “exotic” – I don’t want to look like everybody else, and I also don’t want to look like a supermodel–I just want to look like ME!’ (sorry if this sounds like a repeat of my last blog, but I just have to VENT).

Oh well, I guess that’s a part of the crap that comes with the industry – those sites LOVE putting bad pictures up, and everybody has a few unflattering shots – especially on the red-carpet! I’m still not comfortable posing on it, and (who knows?) maybe I never will be, but I’m just so OVER being compared to my mom looks-wise! I’m happy to have a lot of my father’s features (especially his eyes and lips) – I think he’s very handsome, and I’m quite sick of hearing people call HIM ugly – I think he has a very soulful face – the face of someone with character and integrity – who has LIVED, and has something important to say.