Holly Throsby checked in with fans on her blog at MySpace on Thursday (December 11), after performing at a dinner to celebrate the 60th anniversary of the Universal Declaration of Human Rights. The Sydney, Australia singer songwriter tells readers:

On Wednesday night I had the privilege of being Peter Garrett. Not in his capacity as the federal Minister for the Environment, Heritage & the Arts, no, but in his former capacity as the singer for Midnight Oil.

Amnesty International put on a dinner to celebrate the 60th anniversary of the Universal Declaration of Human Rights. After Geoffrey Robertson QC made his address as key note speaker, the main course was served and I played a couple of my own songs for the guests. I drank a Tooheys New to prime myself for the occasion. Not my favorite beer.

Anyway, then Midnight Oil (with Brian Ritchie, of the Violent Femmes, on bass!) took the stage. They played a couple of classic hits. Then the sound operator gave me a microphone and turned it up to 100 and I was, for about 4 minutes, Peter Garrett, singing my best version of ‘Put Down That Weapon’. Amazing! I have never sung so loud in my life, even though Midnight Oil had never heard anyone sing so quietly in their lives! It was pure synergy!

Holly Throsby checked in with fans on her blog at MySpace on Sunday (October 12). The Sydney, Australia singer songwriter tells readers:

Dear Australia,
Thank you for coming to see us play all about the country. We had a great time and saw many exciting things: the big banana, the big koala, the big prawn, the big golden guitar (which is always a bit disappointing), a big old WWII fuel tank (which we played inside of, in Cairns) and a big jetty which stretches almost 2km into the sea.

We are resting now. I am throwing a stick for my dog at the beach, praying for Democrats in the White House.
ht

Holly Throsby is out with the music video to her new single ‘A Heart Divided’, directed by Yanni Kronenberg and Danielle Zorbas, from the Sydney, Australia singer songwriter’s forthcoming album ‘A Loud Call’, out July 12th on Spunk Records. Watch it below.

Holly Throsby’s ‘One Of You For Me’ Audio

Holly Throsby posted a new single ‘One of You for Me’, from the forthcoming EP of the same name, on her Myspace. A bulletin sent out to fans says:

The song was written a few months ago on a small Casio keyboard. And it was recorded with Holly’s long-time band (Bree van Reyk on drums and Jens Birchall on double bass) in the Kangaroo Valley, at the new home of producer Tony Dupè. Holly played an ancient organ, an odd horn section was roused for the chorus, and Bree percussed on old beer bottles and glassware. It is, surprisingly, quite buoyant. We hope you like it. The 6-track EP, the rest of which is quite slow and quiet (and which features singing by a special guest in one particular song), will be available in stores on July 28th. Details will follow shortly. 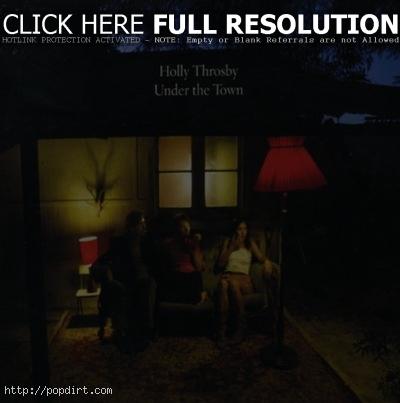 Holly Throsby is out with the music video to her new single ‘Making a Fire’, off the Sydney, Australia singer songwriter’s album ‘Under the Town’, out soon on Spunk Records. Watch the clip via Vimeo below. 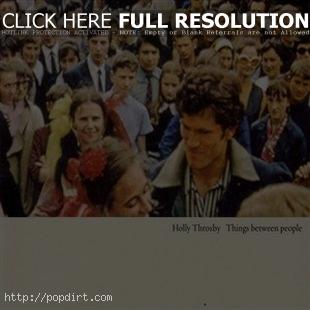 Holly Throsby is out with the music video to her new single ‘Things Between People’, from her debut album ‘On Night’. Watch the video at YouTube.