Leon Jackson Behind The Scenes At Glagow’s O2 ABC

Behind the scenes footage from Leon Jackson’s gig at O2 ABC in Glasgow on July 10th, including scenes from his sound check and meet and greet performance, have been posted at the ‘X Factor’ winner’s YouTube channel. Watch it below.

Leon Jackson continues to develop his song-writing with a trip across the pond to Los Angeles. In Part 2 of his on-the-road diary, ‘The X Factor’ winner is seen spending time with Ernie Halter, whose soul-infused songs have encouraged Leon to work with the man in person. “I stumbled across Ernie’s songs by accident, and ever since been admiring his work from afar, this is such a unique experience to be working with an artist who shares the same passionate vision as myself,” Jackson says. “I can safely say this has been one of the best days in my adult life.” Watch the clip via his YouTube channel below.

After teaching himself piano for no longer than a coupe of months, Leon Jackson decided to make his first ever live piano performance of a track called ‘Lighthouse’ by Ernie Halter, recorded at Db studios in Lincoln, UK. “We decided to record a bare-bones, live acoustic session, at the end of a long day of writing,” ‘The X Factor’ season four winner said. Watch it via YouTube below.

‘The X Factor’ season four winner Leon Jackson teamed up with his friend Sean Rumsey Cover for a cover of ‘Hallelujah’ by Leonard Cohen. “We decided to quickly do this after a great writing session, for some fun,” the pair write. “Hope you enjoy, & thanks for watching!” Watch the acoustic performance via YouTube below.

“We just thought we’d quickly do this for some fun,” they write. “Hope you enjoy, & thanks for watching!”

Leon Jackson checked in with fans on his blog at MySpace (@leonjackson) on Wednesday (December 24). The ‘X Factor’ season four winner tells readers:

I just want to wish all my fans a very merry Christmas. Thank you for all your support this year – I can’t explain how much that means to me! I hope you all have a great day with your families and make sure you eat loads – I know I will be!

So it’s been a really hectic but fun week doing promotional bits for my single and album release.

Last Thursday I appeared on ‘This Morning’ which was great! I did an exclusive performance of ” All in Good Time” one of my tracks from the album which went really well and I also had a chat with Eamon and Ruth who were both lovely!

It’s strange doing all these TV shows again as last time I had just finished the X Factor and now its a year on and it feels so amazing to be performing my songs to everyone! You are all so great for all your messages of support – and its thanks to all of you that “Don’t Call This Love” is Number 3 in the charts!

The full message has since been removed.

Leon Jackson updated fans on his blog at MySpace on Tuesday (October 14) after performing his new single ‘Don’t Call This Love’ on ‘The X Factor’, a year after winning the reality singing competition. Jackson tells readers:

I don’t even know how to put in words how I was feeling that night!

When I arrived at the studios, nerves of excitement immediately kicked in and I was so overwhelmed to be there again.

My mum and friends all headed down to watch the performance which was amazing to see them their and showing their support, it means the world to me!

Before my performance I was backstage getting ready and watching the show from my Winnebago. It was surreal to think I was going to be on that stage an hour later. I also met with the bebo competition winners who sent a video to me explaining why they want to be on the X Factor, they were really nice!

When I went on stage, it was truly unbelievable! I see the four judges sitting there and it just brought back all the memories from last year! But this time I was back to perform a song of my own and show what i have achieved in the year. I was a bit worried because my throat kept drying out and I was constantly drinking honey and lemon before the performance it was a bit frustrating but luckily it held through 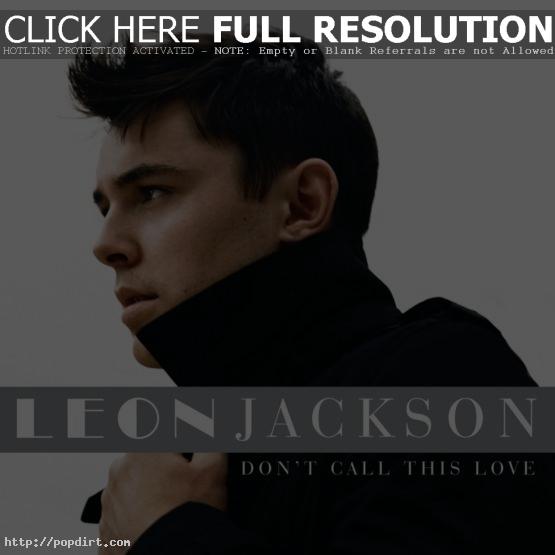 Well, it’s official! My new single ‘Don’t Call This Love’ is available on download from today and hits the shops tomorrow! I can’t believe it. It’s been an amazing journey since winning the XFactor, and hopefully it’s only the beginning! Thanks to all of you for supporting me this past year, I couldn’t have done it without you. I hope you all love the single, it’s my gift to you all.

Speak to you soon – love Leon!

Leon Jackson spoke with News of the World about his debut album ‘Right Now’, which will be released on October 20th. Asked what fans can expect on the disc, ‘The X Factor’ season four winner said, “The music is really a mixture of modern jazz with singer-songwriter elements. A lot of it is really soulful. When I was recording I drew on all the musical influences that I like from James Morrisson to Amy Winehouse to Duffy and Michael Buble, but it’s really my own sound.”

The entire story at newsoftheworld.co.uk and audio clips of ‘Don’t Call This Love’, ‘Misty Blue’, ‘Stargazing’, and ‘Creative’ from the disc have since been removed.