Neil Sean of Sky News reports former Sugababe Mutya Buena is receiving interest from America thanks to her duet with George Michael, ‘This Is Not Real Love’. “I never left the band because we didn’t get along – they were my friends,” Mutya explained. “But I have always been very ambitious and this is the direction I would like my career to go. If I take off in the US it will be a thrill for me as I know all artists secretly want success there.”

Former Sugababes star Mutya Buena spoke with The Mirror about her duet with George Michael on the track ‘This Is Not Real Love’. “Working with George Michael was the best thing that’s happened since going solo,” Mutya revealed. “He approached me three years ago but I was with the band then. I was star-struck after collaborating with him but he was so lovely. He invited me to his house party but I couldn’t go because my dog went missing that day.” Mutya is set to release her debut solo album next year.

Former Sugababes singer Mutya Buena has posted another demo on her MySpace page. Listen to ‘Suffer 4 Love’ at myspace.com/mutya1.

Former Sugababes star Mutya Buena was on hand for the photography exhibition of Scarlet Page, daughter of Jimmy Page, in London, England on Thursday (May 18).

Former Sugababes member Mutya Buena has posted a new solo single at her MySpace site. Listen to ‘Darkside’ at myspace.com/mutya1.

Sugababes newcomer Amelle Berrabah tells The Daily Star that the group’s greatest hits album will feature the woman she replaced, Mutya Buena, on most of the tracks. “I was really disappointed as obviously I wanted to sing everything on the greatest hits,” she said. “But there’ll be three or four new tracks which I’ve helped write so I’m pleased about that.” 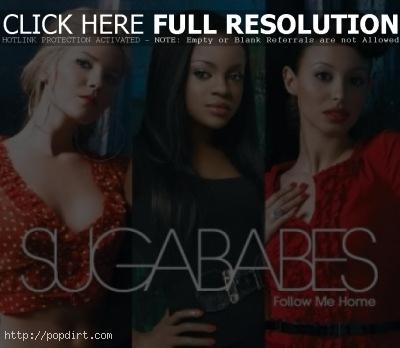 Sugababes, featuring Heidi Range, Keisha Buchanan and Amelle Berrabah, are out with the music video to their new single ‘Follow Me Home’, from the British pop trio’s fourth studio album ‘Taller In More Ways’, released on Island Records. Watch it online at 56.com.

May 7, 2006 – Former Sugababe Mutya Buena is now feuding with the girl group after leaving on fairly good terms, according to Neil Sean of Sky News. Mutya’s plans to battle Sugababes in the charts is the source of the tension, and Buena is boasting, “This will prove just who was the most popular in the band. I am sick of the way they dissed me in the media.”

April 13, 2006 – The Mirror reports that Sugababes Heidi Range and Amelle Berrabah are both planning romantic celebrations, with their respective boyfriends Dave Berry and Freddie Fuller to mark the end of their UK tour this week. “I’m really looking forward to having a night out,” Range said. “We’ve both been working flat out recently.”

April 2, 2006 – The People reports that Sugababes newcomer Amelle Berrabah shocked clubgoers after her pants split at a club. “It wasn’t just a little rip, you could see everything,” she admitted. The 21-year-old was able to stay at the club thanks to her boyfriend, who tied his suit jacket around her waist.

March 22, 2006 – The Mirror reports Keisha Buchanan is sick of men using her song lyrics as pick-up lines. the Sugababes beauty complained, “When ‘Freak Like Me’ came out, a few guys were saying: ‘I’ll be your freak’. But ‘Push The Button’ has been the worst. ‘I’d like to push your button’ and ‘Are you gonna push my button?'”

March 16, 2006 – Top Of The Pops caught up with Sugababes for a Q&A on dating, and asked the trio how dirty is too dirty on the dance floor.

“I can dance with a guy, but I don’t do the whole hands on my butt thing,” Keisha Buchanan advised. “That’s not me at all. Me not even being in a relationship now, I wouldn’t… Maybe when I was about 14 I might have done something like that, but as you get older I think you get, probably a bit more respectful towards your body. The hands on the butt thing is a no no. The leg in between the leg is a no no. There’s needs to be a comfortable gap between people. I don’t want anything rubbing on my leg. I really don’t.”

March 14, 2006 – Sugababes are selling fantastic items including the hand-written lyrics to their new single ‘Red Dress’, a signed copy of their album ‘Taller in More Ways’, tickets to see the girls on their forthcoming sell-out UK tour, and a personal phone call from one of the members. The proceeds will to towards Breast Cancer Care. Check out the auction at ebay.co.uk.

Why Mutya Buena Had To Leave Sugababes

Keisha Buchanan and Heidi Range spoke with The Mirror about the departure of Sugababes bandmate Mutya Buena, who was quickly replaced by Amelle Berrabah. “She just got bored of being in the Sugababes – she needed to break away,” Keisha explained. “I respect her for that. Leaving was the right decision.” Heidi added, “She wasn’t enjoying it anymore – it wasn’t a shock.”

Sugababes Have A Sour Spot For Britney Spears

March 11, 2006 – Sugababes spoke with The Mirror about the first time they met Britney Spears. “Britney was a disappointment. She was doing this fake smile but at the same time saying, ‘It’s so nice to meet you’,” Keisha Buchanan remarked. As for Britney’s underworked hubby Kevin Federline, the 21-year-old added, “Well, Kevin gave me a ‘look’, and Britney just grabbed his arm and pulled him in close to her. He is probably all over loads of girls and if we can see it why can’t she? You know when someone is trying hard to be something they’re not. I don’t think she’s naturally very happy.” Bandmates Amelle Berrabah and Heidi Range also got in on the cattiness.

March 10, 2006 – Keisha Buchanan and Heidi Range of Sugababes took a stab at pop rivals Girls Aloud in an interview with The Mirror. “We’re 100 percent into our music – we’re not manufactured like Girls Aloud,” Keisha sneered. “We don’t see them as competition.” Heidi added, “Girls Aloud aren’t tagged with our bitchy image, they’re more wholesome – but we do get on with them.”

Mutya Already In Talks To Have Solo Deal

Though Mutya Buena quit the Sugababes saying she wanted to spend more time with her little daughter Tahlia, The Mirror hears she’s already plotting a solo career. “Mutya is going solo,” a source revealed. “She’s in talks with Island Records, who look after the Sugababes, to sort out a deal. Then it will be all go. She’s so excited.” Mutya told the paper, “I’ve been so busy. I’m organizing my daughter’s christening and there’s so much to do.”

A source close to Sugababes says despite claims departing member Mutya Buena will remain friends with Heidi Range and Keisha Buchanan, there was some tension with the trio. “Mutya and Heidi weren’t getting on for the last few months,” the insider revealed to The Mirror. “Tensions were high after Mutya had her baby Tahlia because the girls were working so hard. The constant promotion and the upcoming tour proved too much for her and she just wants to spend some time at home with her daughter.”