Nicole Richie: No One Puts On A Show Like Britney

Nicole Richie was on hand for one of Britney Spears three concerts at the Staples Center in Los Angeles, writing about the experience on her blog at Celebuzz. ‘The Simple Life’ star writes:

Friday night I went to the Britney Spears concert and had the time of my life! I have been a huge Britney fan since I was 16 and have been to all of her concerts. I think I went to 5 shows of her last tour. I have been looking forward to seeing her back on stage for years, and it was amazing! It was really hard to get pictures because she never stood still; I yelled and asked her to but she was too busy tending to her 50,000 other fans :). Here’s some of my favorite pictures, it was the best concert I’ve seen in a while. No one puts on a show like Britney!

Photos Nicole took at the show at Nicolerichie.com have since been removed.

Jay Leno joked during his Tonight Show monologue on Wednesday night, “Well, it’s official. Nicole Richie says yes, she is pregnant. She’s four months pregnant. Nicole is going to have a baby. Very happy for her. But this is great. Now it will give Britney Spears’ kids someone to go to therapy with. … More problems for Britney Spears. This poor woman, I am sorry. I don’t know what’s going on there. But now animal rights activists are furious at her because she paid $3,000 for a dog. She bought this dog for $3,000 without checking out the background of the dog breeder. Turns out she got it from Michael Vick, yeah.”

Although claiming “I’m her best friend and I support her no matter what” last night on ‘Late Night with Conan O’Brien’, Nicole Richie said she hadn’t spoke with Paris Hilton since she was jailed, released, and returned to jail, and had no plans to. “I don’t know the details,” she said. “I don’t know anything.” O’Brien never quizzed the ‘Simple Life’ star about the likelihood she’ll be spending time behind bars herself after receiving a DUI for driving the wrong way on the freeway. Read on for the Paris related conversation.

Conan: I’m very well. I’ll just bring up this right away. We’re not
going dwell on this for the whole segment, obviously. But this is got to be, sort of, a strange day for you. It’s crazy this — what’s happened the last couple of days.

‘Extra’ has a look at season five of Paris Hilton and Nicole Richie’s reality show, ‘The Simple Life.’ After spending season four apart, the pair met up for the first time on camera and ‘Extra’ has your first glimpse. Watch it here.

May 18, 2007 – The New York Daily News reports Paris and sister Nicky snuck in the back door of the Xbox 360 Halo 3 preview in Los Angeles, where they got a free Xbox 360 Elite and a beta code to play the game before it hits stores in September. Paris, soon to be facing a 23-day jail stint, confided she’s been gaming a lot at home lately as she attempts to keep a lower profile.

May 18, 2007 – Jay Leno joked during his Tonight Show monologue on Wednesday night, “A photo of Paris Hilton has surfaced. Did you see this on the internet? She’s smoking a joint on the internet, just like a couple of weeks before her court hearing. See, I hope this doesn’t hurt her image as a role model to young women. You’d hate to see – actually, I’m surprised Paris Hilton was smoking marijuana. I’d think she’d do only like designer drugs. … And Paris Hilton’s lawyer told the judge she is so upset about having to go to jail, she can’t testify in a civil suit where she’s being sued for slander. That means, at first Paris Hilton was going to jail. Then, after that, she could lose all her money. This could be the best summer ever!”

May 17, 2007 – Paris has dropped her appeal of a 45-day jail sentence handed down earlier this month after she was found in violation of her probation for alcohol-related reckless driving. Attorney Richard Hutton filed the abandonment of appeal Thursday on the heiress’ request, according to court documents obtained by E! News. The story has since been removed at eonline.com.

May 17, 2007 – Conan O’Brien joked during his Late Night monologue on Wednesday night, “It’s been announced that when Paris gets to jail, her cell will only be 8 feet by 12 feet. Yeah. Which explains why Paris just purchased an 8 by 12-foot ceiling mirror.”

May 16, 2007 – Paris Hilton and her sister Nicky enjoying a pleasant lunch at The Farm with their mother Kathy before they all went shopping and later visited Rick at the Cedars-Sinai hospital on Sunday (May 13). Check out pictures and video from X17.

May 16, 2007 – Paris was spotted out with Stavros Niarchos at Teddy’s at the Hollywood Roosevelt Hotel on Saturday (May 12). UsWeekly.com’s Clubgirl writes, “The two spent most of the night together, laughing and cuddling and Paris leaned over and kissed him multiple times. We watched as she massaged his neck and ran her fingers through his hair. He plays it off pretty cool, but he does seem to have feelings for Paris.” The full story at usmagazine.com has since been removed.

Paris Hilton and Nicole Richie were spotted taping an episode of ‘The Simple Life’ at Kitson in Beverly Hills on Wednesday (April 11), arriving in a yellow school bus from Camp Shawnee. The pair signed autographs between takes of the “reality show”. Check out pictures and video from X17 (pictures & video / pictures) and RexFeatures. Watch footage from TMZ below the cut. END_OF_DOCUMENT_TOKEN_TO_BE_REPLACED

Reuters reports Nicole Richie talked about something shocking she and Paris Hilton performed on participants at a “wellness camp” overseen by fitness guru Susan Powter for an upcoming episode of their reality show, ‘The Simple Life’. “We gave the campers enemas,” Richie revealed. “We did it outside, so that was a lot of fun. It probably wasn’t that fun for (the campers), but it was definitely interesting. It was something that I never thought I would do before.” Read more.

You Tried It Miss Hilton, You Buy It

April 12, 2007 – Mike Walker of the National Enquirer reports that after Paris Hilton tried on two bikinis worth about $300 each at Fred Segal, a saleswoman told the heiress: “I’m sorry, but you’ve got to buy these because you aren’t wearing underwear.” Paris fired back: “I’m not buying these suits – they don’t even fit!” The saleswoman insisted she must, but Hilton refused and left.

April 11, 2007 – Conan O’Brien joked during his Late Night monologue on Tuesday night, “Paris Hilton is not happy. Paris Hilton is angry at a website for saying that she has a sexually transmitted disease, and she wants to shut down the website. Yeah. Which may be difficult, because it’s the website for the Center For Disease Control.”

Paris Hilton, Josh Henderson, Nicole Richie and Good Charlotte singer Joel Madden were spotted outside Teddy’s at the Hollywood Roosevelt Hotel on Wednesday (April 4). After a fan showed some love for the heiress, she lovingly told the woman, “Hey, Whore!” and blew a kiss to the girl. Check out video from TMZ and X17 below the cut. END_OF_DOCUMENT_TOKEN_TO_BE_REPLACED

Hilary Refuses To Talk To Joel, Thinks Nicole’s A Skank

A source tells Us Weekly following Joel Madden’s split with Hilary Duff and quick rebound with Nicole Richie, the Good Charlotte singer has been calling the teen queen, but she “doesn’t want to talk to him.” The tipster added, “She can’t believe he’s dating Nicole and thinks she’s a skank.” 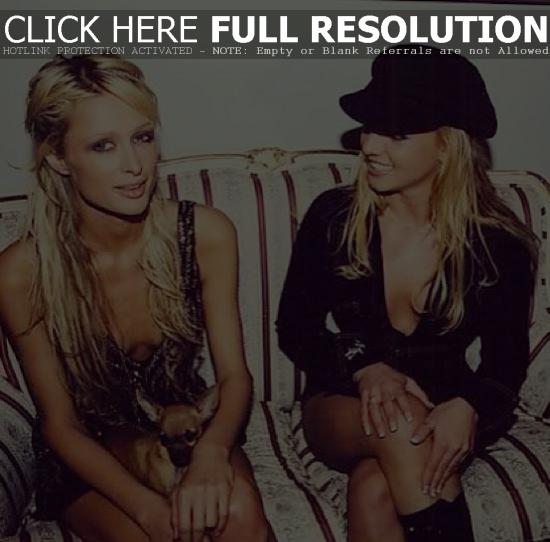 The New York Post reports that after Nicole Richie allegedly tipped off Us Weekly that she was firing her stylist Rachel Zoe because she “wanted to surround herself with positive people and influences. Nicole didn’t trust Rachel anymore,” a friend of Zoe’s is firing back. “Please – and Paris Hilton, her new best friend [after a long estrangement], is a good influence,” the friend asked. “Give me a break. Rachel was acting as a concerned friend and voiced her concerns to Nicole about her lifestyle, and Nicole didn’t want to hear it.”