Sara Lumholdt & Jamie Meyer Team Up In The Studio 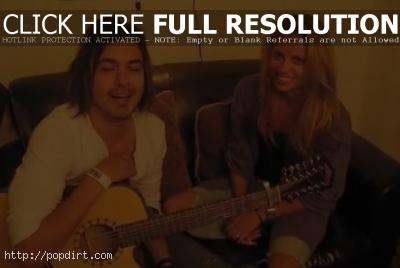 Former A-Teens member Sara Lumholdt asked Jamie Meyer the other day to come in and write a song with her. Jamie videotaped the session in Studio City, where the Swedish artists chatted with each other.

Sara said she’s “finally getting ready with my album and getting myself a deal here in the States.” Sara will be in town for a few weeks to work on the song, and Jamie says another video update will hopefully be posted.

Former A-Teens star Sara Lumholdt performed ‘Another Song About You’ and ‘My Saranade’ during Dreamhack Winter 2008 on November 29th at Elmia Exhibition Centre in Jönköping, Sweden. Watch the performances via YouTube below.

Sara Lumholdt took part in an online chat with fans, with the transcript posted at her official web site. Among the highlights:

On a new album:
“We are hoping for release the summer 2009… I dont know an exact date yet. But the album is done!”

On talk of Melodifestivalen trying to reunite the A-Teens for Eurovision:
“It’s somewhat true. Since I’m in a good spot right now with my own record I said that maybe sometime in the future but not this year.. Doesn’t really fit with the planning of everything. But I would’ve been soo much fun!”

On her relationship with ex A-Teens bandmate Marie Serneholt
“I haven’t personally talked to Marie in years… but I wish her the best!”

The entire transcript at saralumholdt.com has since been removed.

Josh Skiner and former A*Teens member Sara Lumholdt, aka Sara Love, checked in with a video message from the Ted Perlman studio in Los Angeles on Monday (May 19), where they were working on the ballad ‘Mr. Right Now’ and received a message from producer Steven Cahill that he had to cancel on recording the new dance song ‘Get It’ due to his continued recovery from an emergency appendectomy, complicating this since Sara will be back in Sweden by the time Cahill recovers. Sara is currently recording her debut solo album, set for release later this year. YouTube has since removed the video.

Former A*Teens star Sara Lumholdt, aka Sara Love, posted the following bulletin to fans on her MySpace on Thursday (August 23):

Just got back from my performances for NRJ In The Park in Gothenburg and Malmoe, Sweden. It was more than 15,000 people at both shows! Had an amazing time…it felt so good to be on stage after more than 3 years since the last time;) Check out a video of the Gothenburg performance and pics from both shows.

Video of her performance of ‘Glamour Bitch’ in Gothenburg on Friday (August 20) has since been removed at YouTube.

“Glamour Bitch” is SMASH HIT of the week at NRJ Sweden!
http://www.nrj.se/?page=39

I wanna thank all of you for your love and support. “Glamour Bitch” is blowing up all around the world on the internet on different blogs and forums thanks to you. Stay tuned for a lot of great news and surprises…and continue making my song the greatest it can be.

‘Glamour Bitch’ is the first single from my album which will be released 2nd quarter 2008. The song features Milano Money from the Bay area.

Would be great if you take your time and rate it! Only 10’s of course ;) The single will not be official until next week when it premieres on radio. Check back regulary for updates, new design, pictures, videoclips and more. 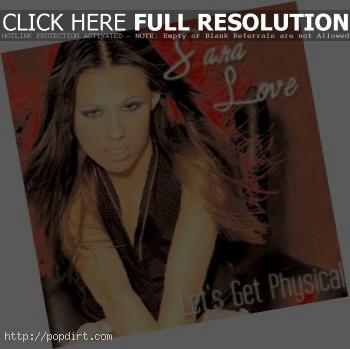 Former A*Teens star Sara Lumholdt, now going under the stage name “Sara Love”, is out with the video to her debut single, a cover of Olivia Newton John’s 1981 hit, ‘Let’s Get Physical’, featuring dancing from Javier Ninja from The House of Ninja. Watch it via YouTube below.