Blitz had a clip, since removed, of former Natural star Marc Terenzi and Sarah Connor’s new reality show ‘Sarah & Marc in Love’, which features the couple at home together getting in heated explitive filled arguments and moments of romance too. 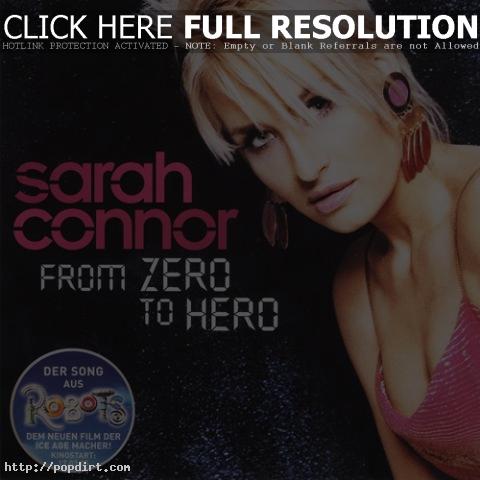 Sarah Connor is out with the music video to her new single ‘From Zero To Hero’, the theme song to the upcoming animated movie ‘Robots’. Connor is doing the voice of Cappy in the German version of the animated flick. The English version will feature Halle Berry’s voiceover as Cappy. Watch it at YouTube.

Lead Role For Sarah Connor In German Version Of ‘Robots’

Sarah Connor will be doing the voice of Cappy in the German version of the animated film ‘Robots’, released on March 17th. Connor takes the role that features Halle Berry in the English version. “I’m totally in love with those little robots, they’re so cute,” Connor said in a press release. “A film for the whole family.” Connor will also be featured on the film’s theme song ‘From Zero To Hero’.

Sony Music reports that Sarah Connor is presently working on her fourth album, and will release the first single from the disc, ‘Change’, later this month. The track will also be the theme song for the new RTL series ‘Beauty Queen’. The new album should be out late Autumn.

RTL.de reports Sarah Connor and Marc Terenzi of Natural quietly married in Sarah’s hometown of Delmenhorst, where only their closest family circle were aware of the hush-hush nuptials. “I hope nobody takes it badly that I wanted to spend this day with my closest family circle,” Sarah said. Meanwhile, the young married couple is again in Orlando, Florida, where they recently purchased a small home to raise their son Tyler.

May 3, 2004 Jeff C Uncategorized No Comments

Sarah Connor was featured on The Rick Dees Weekly Top 40 to discuss her new hit ‘Bounce’, which has the German singer excited about U.S. success. Connor says she hopes to head over her and tour soon. Connor talked about being trained in opera, and then sung a few bars from ‘Bounce’ to close the interview. Audio has since been removed from rick.com.

Sarah Connor was on WBLI in Long Island via phone from Germany on Tuesday (March 9), the day of her self-titled release in America. Connor talked about her new single ‘Bounce’, which she says she didn’t write, but did apply to her life. Connor says she wants to be on the station’s Summer Jam in May. They joked a bit about ‘Terminator’, where Arnold’s character saves someone named Sarah Connor.

Pop acts on television this week will feature several imports, including Canada’s Fefe Dobson, who appears on MTV’s ‘Total Request Live’ on Monday; Germany’s Sarah Connor, who appears on ‘TRL’ on Tuesday; and Britain’s Hannah Spearitt, who appears on ‘The Sharon Osbourne Show’ on Wednesday. ‘TRL’ will also show some exclusive behind-the-scenes highlights from Britney Spears’ Onyx Hotel Tour on Wednesday.

RTL.de had photos, since removed, of Sarah Connor and Natural star Marc Terenzi celebrating the birth of their son Tyler, who was born February 2nd. Tyler was born 21 inches and 7 3/4 lb.