CNN’s Kareen Wynter reports on how the music industry is trying to stay afloat in these challenging economic times, relying on distribution deals with retailers and additional outlets to get their music out such as movies, television shows, videogames, and ad campaigns. But the economy is hurting artists on the road. “I’m like everyone else out there with the exception of maybe Madonna and Prince,” Sheryl Crow said. “We get used to looking at a 3/4ths full house. But I’m grateful for that.” Video of the report at Turner.com has since been removed.

Sheryl Crow, who will make the case to vote for Barack Obama on ‘Larry King Live’ (CNN) on Monday, facing off against John McCain supporter, actor Dean Cain.

Jesse McCartney, who performs on ‘The Ellen DeGeneres Show’ (Syndicated) on Tuesday.

CSS, who visit ‘The Daily Habit’ (Fuel) on Tuesday.

Jon McLaughlin, who performs on ‘The Bonnie Hunt Show’ (Syndicated) on Wednesday.

Natasha Bedingfield, who performs on ‘The Ellen DeGeneres Show’ (Syndicated) on Thursday.

Lenka, who performs on ‘The Tonight Show with Jay Leno’ (NBC) on Thursday.

Black Kids, who perform on ‘The Tonight Show’ (NBC) on Friday.

Jordin Sparks, who performs on ‘GMA’ (ABC) on Wednesday.

Katharine McPhee, who appears on ‘TRL’ (MTV) with her ‘The House Bunny’ co-stars on Wednesday.

The Veronicas, who perform on ‘TRL’ (MTV) on Wednesday.

Jesse McCartney, who performs on ‘TRL’ (MTV) on Thursday.

Sheryl Crow was photographed spending an afternoon with her adopted son Wyatt Steven on August 1st in New York City. The barefoot singer songwriter and Wyatt played in the fountain at Bleecker Street park in the West Village, where other parents and children also cooled themselves in the summer heat. Earlier in the morning, Sheryl performed for the ‘Today’ show in their summer concert series.

Sheryl Crow, who performs on ‘The Late Show with David Letterman’ and ‘The View’ on Tuesday.

Fergie of the Black Eyed Peas, who visits ‘Total Request Live’ on Tuesday and ‘The View’ on Wednesday.

Kate Voegele, who visits ‘The Sauce’ on Tuesday.

Paula Abdul, who visits ‘The Late Show’ on Wednesday.

A Fine Frenzy, who performs on ‘The Late Show’ on Wednesday.

Paris Hilton, who visits ‘The Ellen DeGeneres Show’ on Friday.

Enrique Iglesias, who performs on ‘The Tonight Show with Jay Leno’ on Friday (artist announced).

Sheryl Crow visited ‘Today’ on Friday (February 1), where the singer songwriter talked with host Matt Lauer about her new album ‘Detours’, having intensely personal songs on the disc, and her song ‘Love Is Free’ being about New Orleans. She then performed ‘Love is Free’. Watch the interview and performance below. 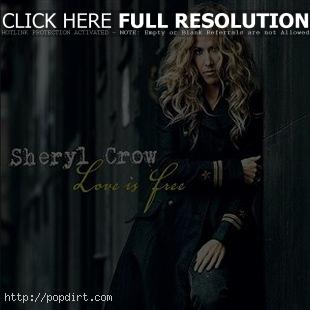 Sheryl Crow is out with the music video to her new single ‘Love Is Free’, from the singer songwriter’s sixth studio album ‘Detours’, out February 5th on A&M Records. “This is the most honest record I’ve ever made. It’s about being forced to wake up,” the 45-year-old said of the album. Watch the video below.

‘Showbiz Tonight’ host Brooke Anderson talked to ‘CNN Heroes’ tribute performer Sheryl Crow about fighting global warming and breast cancer. “I think over the course of the last six to eight months, we’re all being forced to face up to the fact that the science is there,” Crow said of global warming evidence. “There is no more debate and we are looking at even more dire predictions than what was originally predicted by the IPCC. And I think people are starting to feel the necessity when they’re hearing a third of species will be gone in a certain amount of years and are watching the polar caps melt. So it`s – I think, you know six months ago, people would be debating it and also clinging to the hope that this is cyclical. But now, we know, we don’t have time.”

Asked why this show was different and special for her, Crow responded, “I think this is the most amazing idea. Every single day, I go online or I read newspapers and turn on CNN. And it just seems like it is constant inundation of bad news. And this is so great that we are celebrating people who are out there on a day-to-day basis, without the big glory of the awards and all. We’re honoring them here.”

Watch the interview and her performance of ‘Shine Over Babylon’ via CNN.com below.

After a rude TMZ photographer asked Sheryl Crow her feelings on Lance Armstrong’s six-year-old twin daughters Isabelle and Grace bringing her dad’s new girlfriend, Ashley Olsen, to school for show-and-tell… the signer wasn’t happy about it and gave a look that could kill.