Skint & Demoralised are out with the video to their song ‘Failing To See The Attraction’, off the UK pop group’s upcoming debut album ‘Love, And Other Catastrophes’, out next year on Mercury Records.

Matt Abbott explained to MySpace friends that the song isn’t going to be released as a single, writing:

As you will probably remember we were originally planning to release ‘Failing To See The Attraction’ as our next single, probably around this time actually, but unfortunately plans have changed and the single release isn’t happened.

However, we had a bloody good time shooting a video for it in my glorious home city of Wakefield with the help of my good friend Andrew Little (A Little Man Productions). He’s also the man responsible for the videos to ‘The Thrill of Thirty Seconds’ and ‘Red Lipstick’.

Matt Abbott of Skint & Demoralised checked in from his Belly Cam offering the poem ‘Viable Solution’, where he opines about binging and boozing in Britain. Watch it via YouTube below.

Skint & Demoralised are out with the music video to their new single ‘Red Lipstick’, off the British pop duo’s debut album ‘Love, And Other Catastrophes’, out October 5th on Mercury Records. Watch it via YouTube below.

Skint & Demoralised ‘This Song Is Definitely Not About You’ Video 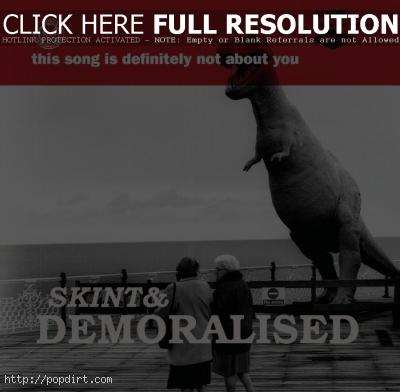 Skint & Demoralised are out with the music video to their new single ‘This Song is Definitely Not About You’, off the Sheffield pop act’s debut album ‘Love, And Other Catastrophes…’, out May 18th on Mercury Records.