The Asteroids Galaxy Tour are out with the music video to their new single ‘Major’, off the Danish pop band’s second album ‘Out of Frequency’, out now on BMG.

Singer Mette Lindberg reacted to an edit to the treatment made by MTV to the group’s fans at Facebook:

This is hilarious. MTV USA have cut out the audio part in our new music video for Major where it says “..She be down on her knee”. I wonder who decides stuff like that! Since when has a sentence like that become too much for the ear?! … The meaning of the words could even be put down as many things.

What Came First, The Chicken Or The Egg? 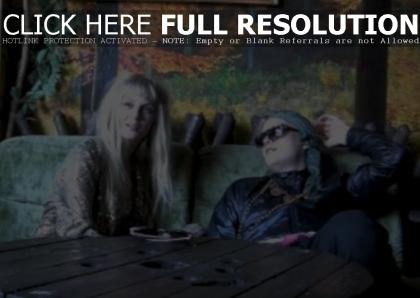 During The Asteroids Galaxy Tour’s European tour about a year ago, Mette Lindberg and Lars Iverson were asked a question by Bloc Party, whether the chicken or the egg came first. Lars guessed the egg while Mette got a bit more technical, thinking bacteria mutated to form a chicken which then started making eggs. Watch the discussion via YouTube below.

The Asteroids Galaxy Tour checked in with fans on their blog at MySpace (@theasteroidsgalaxytour) on Thursday (July 22), talking about their new EP. The Danish alt pop act write:

The past month we have been mixing the songs for the EP, and we are almost there.
We have decided what songs gonna be on it and how the track list’s gonna be.
Also, we are gonna get some remixes done…very exited about that.. always crazy to hear what’s coming up and how the songs have been worked.

Can’t tell you exactly when the EP’s gonna be released, only that it’s just around the corner of the corner.

The Asteroids Galaxy Tour Are Against Carrying Knives

The Asteroids Galaxy Tour have recorded a public service announcement for nejtilknive.dk, with the Danish alt-pop group coming out against people wearing (carrying) knives. “Please Go show your support on sites like this in your own country or here in Danish,” they write. Watch the PSA via YouTube below.

During The Asteroids Galaxy Tour’s spring tour in the US, the Danish band dropped by Shock Hound in Los Angeles and recorded a few acoustic versions of their songs. Mette Lindberg also did a quick interview for the web site, discussing the band’s “collage” of music, loving raw and soulful music, and emotions evoked in her audience.

“We are a big band,” Mette said. “We’re a collage, a collective. We share a love for music and we think it’s a beautiful way of being together with other people, sharing a unique experience. When we play live, it’s important for us that we have a good time together, as a band. We’re good friends, all of us, and that we share a special moment with the audience and make a feeling in people. It doesn’t have to be a happy feeling.”

“I have so many albums and artists and songs that did something good in my life,” Mette said. “I remember when I was younger and I had these really good friends, boys, and they were kind of girlish, and they listened to David Bowie and we’d all hang out doing artist stuff. Boys had long hair. A little bit hippie, but still a little bit long in small city because it was not cool. I remember that psychedelic touch of the glam rock.”

Talking about their new material, Mette said, “We are in the middle of recording album #2. Hopefully an EP later this year, and we’re playing festivals all of the summer. We toured a lot last year, then back in the studio, back in the creative phase, and back getting it all out. It’s kind of good to have both.”

Video of their performances of ‘Satellite’, ‘Push The Envelope’, ‘Hero’ and ‘The Golden Age’, and the interview with Mette, have since been removed.

The Asteroids Galaxy Tour are out with a new tour blog, documenting their May 6th show in Breda, Netherlands. The Danish alt pop group performed at Mezz, a venue which singer Mette Lindberg likened to Noah’s Ark. After a soundcheck and some backstage prep, the band was seen performing at the intimate venue.

The band wrote on their MySpace:

Hey you all.
Thank you so much for giving us a good time.
It has been Great playing in the NL, so many beautiful people.
Hope to see you again..
Here you have May Tour Blog 02.
Tjøsss
//The Asteroids Galaxy Tour

The Asteroids Galaxy Tour checked in with fans on their blog at MySpace (@theasteroidsgalaxytour) on Wednesday (April 21) announcing their show tomorrow night has been cancelled. The Danish alt pop band write:

Behind The Scenes As The Asteroids Galaxy Tour’s U.S. Tour Wrap Up

The Asteroids Galaxy Tour are out with the final video blog for their US Tour March 2010, featuring their stops in San Diego, Los Angeles and San Francisco. The Danish alt pop band are seen in flight, soundchecking, watching a plane land, doing an acoustic session, performing at The Echo in Los Angeles, and hitting the stage for the last show of the tour in SF.

The Asteroids Galaxy Tour Behind The Scenes In DC

The Asteroids Galaxy Tour posted more behind the scenes footage from their U.S. tour stop in Washington DC, where they played at DC9 on March 15th. The Danish alt pop group are seen rehearsing and performing at the venue before getting a lesson in how to speak in a Brooklyn accent on their way to the next gig at New York City’s Mercury Lounge. Watch the clip via YouTube below.

The Asteroids Galaxy Tour Behind The Scenes In Philadelphia

The Asteroids Galaxy Tour posted highlights from their US Tour stop in Philadelphia, where they performed at Kung Fu Necktie on Sunday (March 14). The clip features Mette petting a zebra painting, the band waiting for their luggage at the airport and checking out some diner dancers. Watch it via YouTube below.