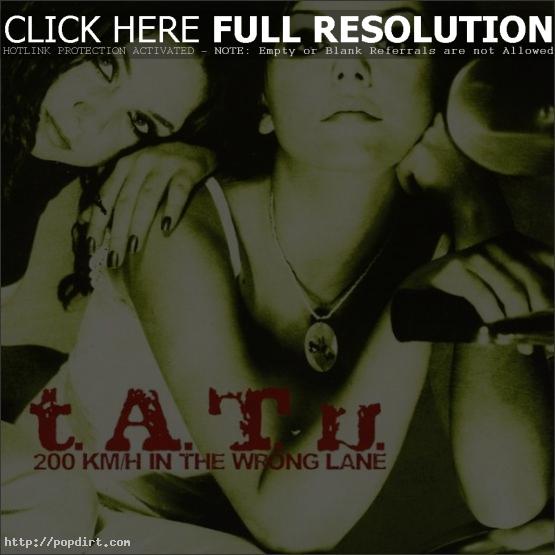 For those of you who are not familiar with TATU, they are two Russian teenage (supposedly) lesbians, Yulia Volkova and Lena Katina, who literally dominated the world with their famous hit ‘All The Things She Said’. In 2003 this song was everywhere, and Tatu as well. Their album went triple platinum around the world. And they are also first foreign artists who’s native language album went platinum in the world. Lets talk about this album.

1. Not gonna get us
This song has nice beats and its euro-dance song. Its a cool tune, makes you bounce around on your bed. Even though it did poor in the States, I still like it

2. All the things she said
This song is A LEGEND, very catchy, with emotional lyrics and cool guitar. They sing about their lesbian love.

3. Show me love
This is one of my favorite songs on this album. Very catchy, nice lyrics and awesome beats.

4. 30 minutes
This song is boring, too slow, but the lyrics are incredible in my opinion. I usually skip this one

5. How soon is now
Wow, I gotta tell you, this is the reason why you should buy this album. Performed originally by the Smiths, TATU did a great job with a cover of this song. You can really feel that they put a lot of work into this song, vocals are amazing as well. My favorite

6. Clowns ( Can you see me now)
This song is amazing. Very hype and rocky.

7. Malchick Gay (Gay boy)
This is nothing special, another pop tune with catchy lyrics and music. AN ok song, don’t care much about it. But The Russian version of Gay boy i like a lot, its a dance song with nice beats. I wish that DJs would be more open minded and use some world music on the dance floors, because Russian music is very well done and amazing.

8. Stars
This is a highlight of the album. Very relaxing emotional song with beautiful middle eastern instruments used. Lyrics make you sad, one of the girls raps in Russian and it came out well.

9. Nas ne dogoniat
Russian version of Not gonna get us, and its better. Russian is a very beautiful language.

10. Ya soshla s uma.
Russian version of All the things she said and its better. You can sense more emotions put into this song, and lets face it original is always a better one to some extent.

11. Show me love(extended version)
This song is better than the original, much better in my opinion. Nice beat, and better sound.

This album also includes video of ‘All The Things She Said’, and behind the scenes footage if you want to get to know the girls better. I am glad that they had this footage, because the girls seem really down to earth and plain fun.

Over all this album has original sound to it, very nice cover of How soon is now, vocals aren’t the strongest point of this album, music and lyrics are. With few flaws this album still manages to take your breath away. Honestly I am quite tired of rap and hiphop or RnB. SO this is a fresh sound. Over all, TATu is the best one hit wonder to come out from Europe and actually succeed in America.