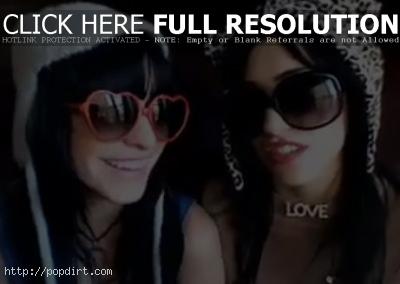 The Veronicas checked in with a video message on their YouTube channel, urging fans to vote for ‘Untouched’ for Best Pop Video in next month’s MTV Video Music Awards by going online at MTV.com until Wednesday, July 30th at 11am EST. The Brisbane twins also talked about the U.S. release of ‘Hook Me Up’ on September 16th and plans to tour America in support of the album.

“Since getting to #10 on ‘TRL’, we became too cool, so we put on some sunnies and some streamer hats. No, seriously, we are stoked because you guys got us to #10 on ‘TRL’. We found out the news a few days ago, and we partied and got hair extensions and got fringes, otherwise known as bangs, so that we look the same,” the twins said.