The Wanted On Fan Hookups, Olympics And Being Called A Boyband 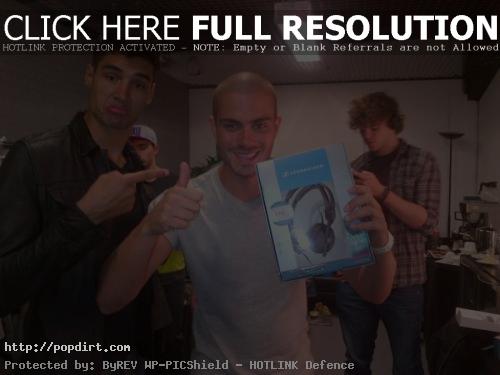 Max George, Jay McGuiness, Siva Kaneswaran, Tom Parker and Nathan Sykes of The Wanted stopped by to chat with Elvis Duran and the Z100 Morning Show recently. The guys were asked who is the biggest “slut” and “bitch” in the group, hooking up with fans and if they fear the tabloid kiss and tell, their thoughts on being in a boyband, who has the largest weiner in the group, if the Backstreet Boys and *NSYNC inspired them, Siva getting punched in the testicle by Justin Bieber and Siva and Jay getting to carry the torch at the summer Olympics in London.

On hooking up with fans who attend their concerts, Jay said:

A lot of times after shows, we’re in bars anyway, and the hot ones are often old enough.

I always said from the first day we got in the band, when somebody does a kiss and tell story on you, you know you’ve made it.

Nathan on appearing on lesbiansthatlooklikejustinbieber.com:

I was very proud. It was a compliment. I’m honored enough to be on that web site. I’m not a lesbian.

On if they like being called a boyband, Jay said:

No. I think that’s generally what we are. That’s our genre. Some people think boybands are cheesy and I think some boybands maybe are but we try not to be and if people are anti boyband then cool, you’re not our fans but we have a lot of people that don’t care, so we’re happy.

On the career arc of boybands, Tom said:

I think that certain boybands have like themselves a very young audience and then when that young audience gets to a certain age, they’re like I don’t think I like that anymore. But in the UK we kept it as open as we could, we wanted to aim at young kids and older people. As they grow older it’s like you know what, I enjoy the music. It’s more about the music than just selling the posters to the kids.

On if they were fans of Backstreet Boys or *NSYNC growing up and were inspired by them, Tom said:

I wouldn’t say I was a fan growing up, but they made some pretty good songs. ‘Incomplete’ by the Backstreet Boys was a great song, and *NSYNC obviously Justin (Timberlake) has done so well. I’ll be following Justin’s footpaths at some point. Move the career along. Joking.

On Siva being hit in the balls by Justin Bieber:

He was intrigued by me. I’m very quiet and he wanted to figure me out and he smacked me in the left testicle.

Asked if he wanted to punch Bieber after the incident, Siva joked:

I didn’t want to ruin his makeup. He had a lot of makeup on that day. I walked in and I’m just gonna say it honestly. I walk in and said that little bastard punched me in the testicle. I’m gonna get him back.

On Siva and Jay’s role in the London Olympics, Jay said:

We got a chance to pick people that had hard lives and still worked for their community. We picked some people that are going to run with the torch, and as a bonus, we’re gonna get to run with it as well.