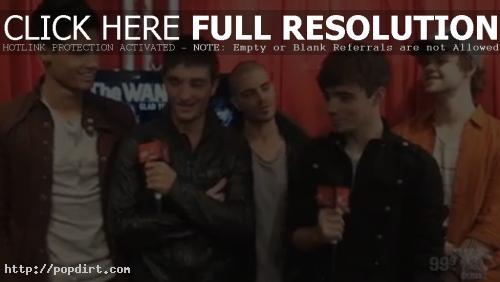 Max George, Jay McGuiness, Siva Kaneswaran, Tom Parker and Nathan Sykes of The Wanted visited with Special Ed of Virgin Radio in Canada, where the UK boyband talked about whether the success of ‘Glad You Came’ created pressure for the group going forward, doing the music video for the song in Ibiza, how ‘Chasing The Sun’ is a continuation of ‘Glad You Came’ and if there was a method to releasing the two similar songs.

On if being on top of the charts brings pressure, Nathan said:

Yeah I think there is more pressure to be good. I think it would be a lot easier for us if it didn’t do well, so we could walk around and quite openly say we’re rubbish. Now people expect us to be halfway decent, so there is slightly more pressure.

It was great through, that song was the sound of the summer and they had a lot of ideas on what the video should be and we were like no we think people are gonna connect with seeing the party happen that you would imagine when you listen to that song. We had a great time. Every video shoot should be like that.

How ‘Chasing the Sun’ differs from ‘Glad You Came’, they collectively responded:

On whether ‘Chasing The Sun’ getting released was based on ‘Glad You Came’ being a success, Max said:

I think we just had withdrawals after we sort of did all the songs after ‘Glad You Came’ and we thought you know what, we want to finish this story. We want to keep the party going, so that’s what we’ve done with ‘Chasing the Sun’. It’s all about you know getting to that point where the song comes up in the morning rather than a song going down in the evening, so we’re shooting the video too in LA and that’s gonna be massive.