Tyler Hilton was recently asked if he searched for himself on YouTube by his old roommate Andy, he said he hadn’t and the buddy told him to check out what’s been posted. In Tyler’s latest YouTube posting, he offered his thoughts on people who have posted covers of his songs.

“The stuff that I found on YouTube is really, really cool,” Tyler said about the covers of his songs. “You guys gotta check this out. I found people doing my songs a cappella, like they just don’t want to play guitar so they just stand there and sing it, which is awesome. Some people learn exactly how I play a tune on acoustic guitar. They learned it and then they’re playing it. Some people learned one of my tunes and have decided to teach you how to play my tune.” 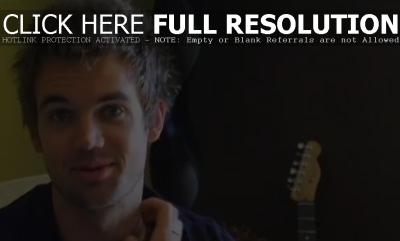 After posting some covers, he said, “You guys gotta keep sending me these videos, because I’m starting to think I want to maybe do more episodes like this where I’m showing what you guys are putting out there. I would say get crazy with it too, because the most fun stuff for me to watch is the stuff really creative that you guys are doing. There are some people singing my songs that are really really good, not just having fun with it, which is awesome.”

One thought on “Tyler Hilton Critiques YouTube Covers Of His Songs”