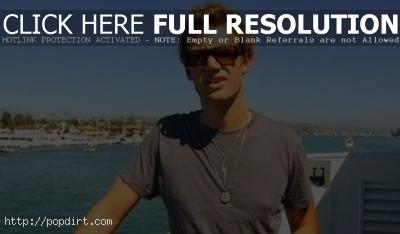 Tyler Hilton checked in from The 3 Hour Tour in sunny Newport Beach, California on August 10th, where he was performing a special show for 200 fans on board a yacht.

The singer songwriter said, “What we did is we took some time off from the studio and got the record mixed and done. Now we’re just gonna make sure it’s done and see if there’s anything we want to change. The record is gonna be coming out early next year so I’ve got a little bit of time before it comes out to make sure everything’s perfect, but we’re done pretty much.”

Hilton continued, “The rest of the time I’m just kind of clinging to the summer of ’08 with all of my appendages. I don’t want it to end. My summer recording, my summer moving back to LA. I’ve got a nice base going because I’ve been hanging out by the pool a lot and just doing things like this. This is a show on a boat I’m doing called The Three Hour Tour. I’m on the top deck enjoying the sun. It’s a great day in Newport Beach. The summer has been full of things like this. So you can’t blame me, I don’t want the summer to end.”

Watch the message and highlights from the performance below.