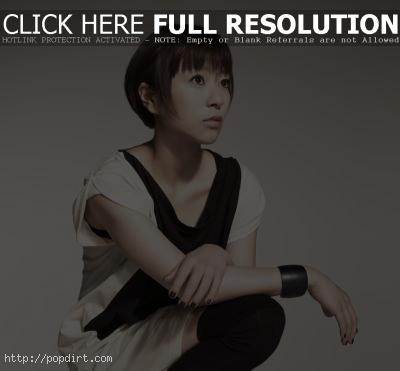 Popdirt.com caught up with Hikaru Utada for a Q&A as the Japanese-American pop singer prepares to release her third English album ‘This Is the One’ on Island Records soon.

Q: Talk about how your sound has evolved since your last English album, 2004’s ‘Exodus’?

A: ‘Exodus’ was a very experimental album. I was like a mad scientist working away in an underground laboratory.

I had the time of my life but it was a very intense, introverted process. Since then I have released two Japanese language albums. Through those I’ve become increasingly “pop,” going to back to basics, becoming simpler, more melodic, making songs people can sing along to.

I think I’ve reached the peak of that “pop”ness with my new English album, “This Is The One.” (I am starting to feel the urge to make something really weird… for my next album maybe.)

Q: It has been extremely difficult for non U.S. pop singers to come anywhere near matching their home country success in America (note: Utada is from New York but became a superstar in Japan in 1999 with her debut album ‘First Love’). Do you go into this new album with tempered expectations or are you aiming to make a big chart impact?

A: No. Success just happens, they’re like accidents. What is “success” anyway? Most of the famous and rich people I know are unhappy. I live life with no expectations, be it my career or my personal life. I’m grateful for everything I have and I find great joy in living life that way.

Q: Your last English album led with ‘Easy Breezy’, which featured a song that had the lyric “you’re easy breezy and I’m Japanesy” and “Konnichiwa, Sayonara”, suggesting an Asian artist to the listener, whereas with ‘Come Back To Me’, one listening to the song on radio might easily think Mariah Carey was singing the track. Did you want to present yourself outside a racial identity on the song and is that the goal on the entire album?

A: Yes, I wanted to make something that was universal. Human being to human being. I got bored of using my Japanese-ness as a motif. I get bored quite easily, and find I must constantly move on to new things.

Q: Stargate have had great success generating top 10 U.S. singles with Ne-Yo, Rihanna and Chris Brown, so are you hoping American radio will give you a fair shot thanks to how Stargate have proven to be hitmakers?

A: I write all my songs (the ones I did with Stargate, too), so no matter how great Stargate may be, the stuff isn’t going to fly if I suck. I’m glad I chose to work with them; we have really good chemistry. We made good music. I’m promoting this stuff now so that as many people as possible might get to know about it.

Q: Is there a plan to tour in support of the album or is it largely dependent on the success of the first single and album sales? So if ‘Come Back To Me’ does well maybe a second release would come out late spring and you could be part of the annual Top 40 radio tours in support of it.

A: No specific plans yet. If there is more demand for a tour, I’ll start making plans. Actually, everyone is asking me about that, and I ought to, soon.