With both artists being profiled on Access Hollywood earlier this week, Candie’s today formally announced the new campaign featuring music artists Ashanti and Vanessa Carlton, the first endorsement contract for each of the young stars.

Commenting on how she feels about the new campaign, Ashanti stated, “Candie’s is hot. I see a lot of artists that do it, and I’m definitely proud to be a Candie’s girl.”

Added Vanessa Carlton, “One of the reasons I chose to
do the campaign is because I love how irreverent the photos are, it’s an example to young women to embrace who you are.” 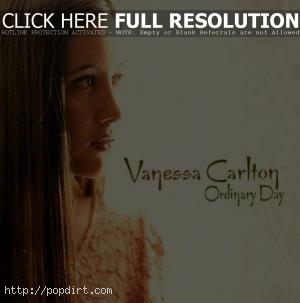 June 19, 2002 – Vanessa Carlton’s latest single off of ‘Be Not Nobody’ is available on video at YouTube. No doubt after filming ‘Ordinary Day’, Vanessa had a sore neck. Check out the video below.

June 19, 2002 – Access Hollywood was there when Vanessa recently did her Candie’s photo shoot. While appearing serious in her video for ‘A Thousand Miles’, Vanessa showed a different image in her sexy photo shoot. “I don’t think it is that far out,” she said. “I think it is fun.” As for her pose where she’s eating noodles on top of a piano, Carlton commented, “It is provocative.”