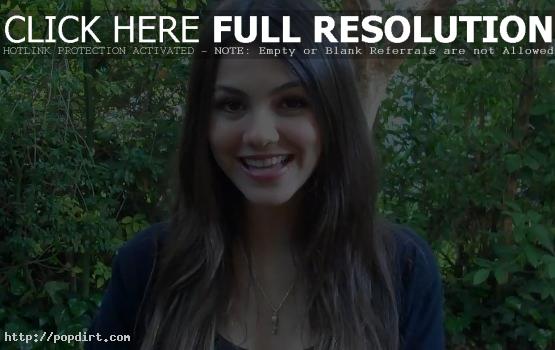 Victoria Justice was recently on the phone with Valentine in the Morning on 104.3 MYfm in Los Angeles, talking about the cancellation of her Nickelodeon series ‘Victorious’, starring with Johnny Knoxville and Chelsea Handler in ‘Fun Size’, and her character in the film.

On how she would have liked ‘Victorious’ to end, Justice said, “My character Tori Vega is an aspiring pop star and singer, so I would have liked her to be able to have a big hit single or something or go on tour, do something cool with music, because I know she was super into that. Then, I mean god, I don’t know. I think her sister Trina could have ended up on a show like ‘The Bachelorette’ because she’s super over the top and dramatic and ridiculous, like on some reality show. I feel like Beck and Jade should have gotten back together, there’s so many things.”

As for whether it was crazy working with Johnny Knoxville on ‘Fun Size’, she said, “No, actually it wasn’t that bad. Johnny, I was super surprised when I first met him, he’s like the nicest guy. He was really friendly and personable, just a southern gentleman. He was great. Chelsea was awesome as well. I love her sense of humor. I love that she has this dirty mind. We had a good time together. We don’t really have that many scenes together in the movie, but the time that we did get to hang out was fun.”

Listen to the interview via 1043myfm.com below.

3 thoughts on “Victoria Justice Imagines A Different Ending For ‘Victorious’”