Wanda Sykes was on ‘The Tonight Show with Jay Leno’ on Thursday, where the comedian was asked about talk that the judges on ‘American Idol’ have been too mean. “You know, to me, nobody is forcing these people to come down there,” Sykes said. “You know, they really are. Nobody is forcing them. And sometimes you just need to be told. You know, you really – sometimes you need to crush a a few dreams. You really need to stop the, you know, stop the craziness. But I think what they should do – ’cause, you know, they’re saying that he was picking on people who were, you know, like – mentally challenged. So, what they should do is, like, how we have the Special Olympics. They should have a ‘Special American Idol’. Come on, Jay. You know you’d watch that. The ‘Special American Idol’. [Singing] ‘Ah, baby, baby.’ ‘Don’t take this. Don’t eat the microphone, sweetheart. Don’t do that. Put that down. Okay. Can somebody get him some pants, please.'”

January 26, 2007 – ‘American Idol’ failed contestant Ian Benardo was on ‘Extra’ on Thursday (January 25) to discuss his run-in with Simon Cowell and crew during the show’s New York auditions. “People recognize me everywhere I go,” he said. “People are asking me about what my next career move is.” So, what does Ian plan to do with his ‘Idol’ fame? “I really want to be a talk show host,” he revealed. “I really believe that I can be the next big American sensation.” 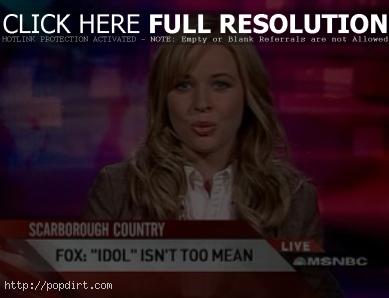 January 24, 2007 – After the first two shows of ‘American Idol’ aired last week, controversy has already begun. Fox News Channel’s Anita Vogel spoke with ‘Idol’ judges Simon Cowell and Randy Jackson about the controversy, while Paula Abdul called suggestions she was under the influence of drugs or alcohol during a recent press tour “is absolutely insane for me”. Video at FoxNews.com has since been removed.

«Jessica Biel Meets Up With Justin Timberlake At Sundance
Richie Stringini Back In Germany, Back With US5»