Yahoo! Music’s ‘Who’s Next’ features Jon McLaughlin, where the singer songwriter talked about how much he hated to take piano lessons in high school as a kid and how the lessons he learned were beneficial in emulating an artist he looked up to. 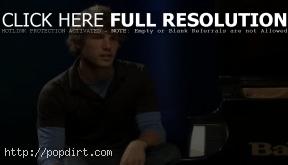 “Everybody goes to piano lessons, but when you’re a freshman in high school, nobody has piano lessons anymore,” McLaughlin said. “Every week, I was trying to talk my parents out of these piano lessons. I would come up with any angle I could. I’d try to talk them out of these weekly lessons, and it would never work. One day I just put my rollerblades on, went out real quick, ironically it was right before a piano lesson. I fell the wrong way. I wish I could say I was doing some wicked trick or something off a car. Just fell the wrong way and broke my wrist and that was my out. I was happy to take two broken arms for a couple of months to get out of (the lessons). I ended up not playing piano for a couple of years after that.”

Citing Billy Joel as an influence, Jon said, “The thing was, especially at the time I was in high school and wanted to get out of it, I never really bridged the gap between classical piano that I was playing week after week after week, and the Billy Joel tape that I loved to watch. Nobody ever put a Billy Joel song book in front of me and said you can actually play ‘And So It Goes’. You can play that. It wasn’t until 5-6 years ago that I started kind of doing what I’m doing now.”

Watch the performance of ‘Beautiful Disaster’ (the interview has since been removed) below.