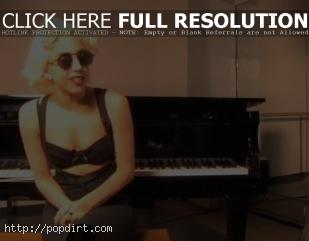 Janelle Revord of Austin, Texas was the lucky winner who submitted her video of why she thought she should be the MySpace fan that won a chance to “Get Close” to Lady Gaga by discussing in detail how much the ‘Poker Face’ singer’s music has helped her thru some tough situations. Janelle along with one pal was flown to Boston to interview Gaga as well as film part of her show. Janelle made a teacup for Lady Gaga before talking with the star about how to be part of her road crew, marrying performance art with pop music, and more.

Asked what steered her towards pop music after having such varied influences, Lady Gaga said:

Because it was the most original thing I could do in downtown New York, because in 2004, pop music was a dirty word and it was synonymous with plastic and manufactured and fake. I was living in a neighborhood on the Lower East Side where there was a lot of indie music. I used to go out and listen to music and I didn’t like it. I felt that it was sad and I felt that it was depressing, and I thought that there was a celebration of sadness that I don’t personally resonate with. I’m an innately sad and melancholic human being, but I channel that into my music and my greater gift to the world is to liberate. When people say what is it that you do, are you a singer or a writer or are you a performer, I say my art is liberation.

The interview and highlights from the show have since been removed at MySpace.

«Justin Bieber To Guest Star On ‘Wizards Of Waverly Place’?
Frankie Sandford: “Snot Came Out Of My Nose During The Performance”»