Charlotte Austin spoke with The Sunday Mirror about her 18-month romance with Robbie Williams. The New Zealand-born 26-year-old met the singer last year when she was working in the five-star Conrad Hotel next door to his Chelsea apartment. “It had been just a normal night hanging out at his place the first time we had sex,” Austin said. “Late in the evening we were sitting on the couch and he started to kiss me – it was just like with any other couple – we kissed and things started to get heated. Even though it was Robbie Williams, it still isn’t like a movie where people are ripping clothes off and I get carried to the bedroom. It was all very real, but very lovely – we just walked into the bedroom and proceeded to have serious hanky-panky. It wasn’t kinky, it was straight-forward, but he is very, very good at what he does – he knows how to treat a woman, and he likes to leave the lights on. It was all very sweet and it was the best sex I had ever had – not because it was Robbie Williams, but because he is so unselfish and just so lovely about it all. And stamina-wise – he has no problems at all.” 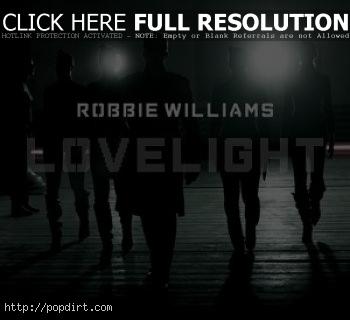 October 1, 2006 – Robbie Williams is out with the music video to his new single ‘Lovelight’, from the British pop singer’s seventh album ‘Rudebox’. The Jake Nava directed video was filmed in Vienna, Austria during a break from Robbie’s European “Close Encounters Tour”. Watch it via Yahoo! Music below.

September 28, 2006 – MTV caught up with Robbie Williams and asked the singer why he thinks people haven’t been embracing his last single ‘Rudebox’. “It’s confused me,” he admitted. “Lots of people have said, ‘We don’t like it, we don’t get it’, but to me it’s really strong. I personally love it.”

Robbie added that the song “has a very special place in my heart. I think out of any Robbie Williams song I’ve written, I’ve listened to ‘Rudebox’ the most. I’ve played it to death; it’s almost worn out my computer.”

Robbie Bouncing Back From The Blues

September 24, 2006 – News of the World reports Robbie Williams reassured those close to him that he’s fine after the news he’s been suffering from depression emerged. “I’m okay. I’m exhausted and haven’t been home for ten months because of my tour and promoting my album,” Robbie told a source. “It’s all got too much for me and I have been told to rest for two weeks. My South American tour is coming up and I want to be ready for that.”

September 21, 2006 – Robbie Williams’ former songwriter Guy Chambers tells The Sun that duetting with Shakira would be a perfect way for Robbie to crack the U.S. market. “He should always have done that,” Chambers remarked. “It would be the perfect match and I would like to write the tune for it. It would be a worldwide hit and would break Robbie in America.”

September 17, 2006 – The Sun reports Robbie Williams defied legal warnings from ex-manager Nigel Martin-Smith and rapped his new song ‘The 90s’ in front of 65,000 fans at the Milton Keynes Bowl. “Did you see a story in The Sun today about me,” Williams asked the audience. “My former manager’s got a problem with a song on my album called ‘The 90s’.” Robbie then rapped the lyrics, and asked afterwards, “What’s wrong with that?” Read more.

September 17, 2006 – News of the World was told that the signs of Robbie Williams’ fatigue, which prompted him to cancel the Asian leg of his world tour, were there for all to see when the singer performed at Milton Keynes on Thursday night. He was sweating profusely and telling the 65,000 fans he “felt like sh**.” One fan said: “He was out of control, touching up the backing singers and making a pass at the keyboard player. You could see it all on the big screen.” Another added, “He just wasn’t himself. He couldn’t stop sweating.”

September 17, 2006 – The Mirror reports Robbie Williams has cancelled concerts in Shanghai, Hong Kong, Bangkok, Singapore, Mumbai and Bangalore in November because of stress and exhaustion. “These performances would be asking too much,” a spokesman said. “They would have greatly added to his workload.”

September 14, 2006 – The Sun reports Robbie Williams could be forced to remove the track ‘The 90s’ from his new album ‘Rudebox’ before it is due to hit stores on October 23rd or else face a possible lawsuit from his former manager Nigel Martin-Smith. “Nigel is getting really heavy with his lawyers over these allegations. He is taking it very seriously,” a source said. “He was furious when he found out about some of the lyrics in the song and wants it deleted from Robbie’s album. Robbie’s lawyers are now dealing with it and have agreed that no copies of the song will be distributed until the legal issues have been resolved. They have also agreed not to release the lyrics anywhere until it is all cleared up.”